"We Need Some English Majors/Right This Very Minute..." 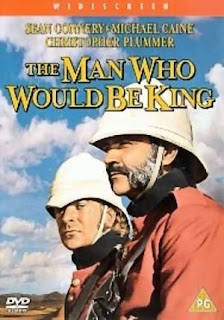 My day starts this way: first, I receive this in my inbox, an article telling me (as if I haven't been living that "dream" since 2001) that humanities graduate students should quit while they're behind, before they get even further behind.

Then I hear this on NPR. I hadn't planned to see "Avatar" anyway (I was sure it's simply another special effects extravaganza, and nowadays I reserve those delights for Marvel Comics movies. Iron Man 2! Whoo-hoo!), but this run-down of the movie convinced me to avoid it, not least because the "white man" (well, they are blue creatures!) with his superior technology manages to become "king" of the "primitive natives" ("Avatar" may crib from Disney's "Pocahontas," but at least the latter movie managed to avoid that dreadful colonialist cliche). What do these two things have to do with one another? "Only connect," as E.M. Forster advised.

I don't know much about "Avatar," but I do know something about colonialist literature. Rudyard Kipling, that icon of British Empire, wrote a wonderful story about "white men" who presumed they would be kings in a "simpler" culture, a "native" one (funny how we are never "natives," but "they" are, huh?). "The Man Who Would Be King" doesn't end all that well for the protagonists who presume they will lead (although it made a smashing movie. Odd James Camerocn didn't crib from that one, isn't it?*) Then there's H.G. Wells' wonderful fable on the old adage "In the country of the blind, the one-eyed man is king." Turns out the stranger to another culture is just that: a stranger to the culture. He is not superior, more capable, or even the Messiah the people have been waiting for (which is a curious twist on the Messiah myth: Jesus was Jewish, nothing more or less. He wasn't an "outsider" in Palestine, he was a homeboy. But I digress...). We never regard the immigrants to our shores as the ones who understand our culture better than we do. Many right now don't even want to accept Barack Obama, and complain about everything from his supposed birthplace to the fact he grew up in "exotic" Hawaii. But when we go "abroad," or enter another culture, well, of course....superiority proves out, doesn't it? We may deny a belief in the "divine right of kings" and show allegiance to "bloodlines," but we've yet to really stray far from the idea that there are superior and inferior races, and the former are simply destined, in all places and situations, to rise to lead the latter.

George Orwell could tell us a thing or two about how that works out in reality. Kipling and Wells, who were both as familiar as Orwell with the efforts and effects of colonialism, could teach us a thing or two, too. And even if we can't expect those lessons to appear in multi-million dollar movies that are, after all, simply excuses for newer special effects; can't we at least expect them to be regarded when the question is, say: What do we do about Afghanistan?

Maybe a few English majors hanging about, if only to whisper in the ears of the victors that all fame is fleeting, wouldn't be such a bad idea.


*I take it back. Cameron actually says he did. But unless his protagonist learns humility and finds he is not superior to the culture he joins technologically, I still have to say Cameron learned the wrong lesson from the film.