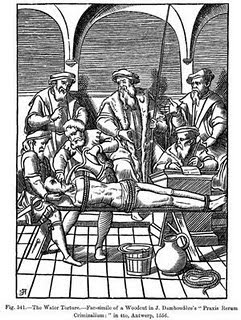 I went to the dentist today, and actually found a current magazine! Clearly a sign I should blog about the article on Alberto Gonzalez! Which contains such journalistic insights as these:

“Listen, we’re in a war, and the only way to win a war is to be tough,” he would tell me several weeks later, noting that the Obama administration has continued many of the policies he gave legal blessing to, both as White House counsel and as AG under George W. Bush. “Everyone is learning that to be successful in this environment, you have to go to the limit of what the Constitution allows.”

(No mention that torture violates Federal law, and the "When the President does it, it's legal" argument, goes back to Richard Nixon and Watergate.)

Classic Texas Monthly style, that. No answer to the question, no clarification, no follow up. Because it really matters how you define "torture," you see. We really must argue the point awhile, because it's a gray area.

This circle was easily the most hawkish and aggressive within the administration. The caustic, imposing Addington, who as a longtime Washington hand knew more about presidential wartime power, the Constitution, and Capitol bureaucracy than just about anyone in government, set the tone with his contempt for those who advised caution, or were soft. He was, like Cheney, not interested in opposing opinions, and members of the State Department or Congress were excluded from meetings.

I.e., don't blame Alberto. He was only doing his job. He didn't know anything about the Geneva Conventions. He relied on others. He was only following orders. And that whole "opposition" thing? That's how we do it in courts of law, so the law is followed and the truth determined. But this was a crisis, so protecting the country "legally" meant whatever John Yoo thought. Seriously:

The only person in the administration who knew as much about presidential wartime powers as Addington was a young legal scholar from Berkeley named John Yoo, who was the deputy assistant attorney general in the OLC. A product of Harvard and Yale Law, Yoo was a whiz kid whose conservative bona fides—he’d clerked for Justice Clarence Thomas—were indisputable. Within weeks of the attacks, Gonzales was asking Yoo for memos outlining the limits of the Geneva Conventions. Yoo was generous: Since Al Qaeda and the Taliban militia did not constitute a nation or a state, he concluded, they had no protections.

All the opposition to Yoo's legal opinions? Alberto has an answer for that, too:

Would it have been nice to invite everyone to these meetings? Sure, but it just doesn’t work that way. Were there times others should have been invited? I have to concede it may have been helpful, but we did the best we could under the circumstances.”

See, it's not his fault. He couldn't help it. You can't blame him. He didn't try, but trying is hard! Besides, does this sound like torture to you?

In March 2003 Yoo sent out another crucial memo, this time exploring the limits of prisoner interrogation. He concluded that military interrogators were not subject to federal laws prohibiting assault, maiming, or other uses of force during questioning because the end goal was “to prevent further attacks on the United States.” The memo suggested that acts like dousing prisoners with scalding water, corrosive acid, or caustic substances; slitting an ear, nose, or lip; or disabling a tongue or limb were not criminal.

Well, it's certainly not what they meant:

To Gonzales, Abu Ghraib was not, as critics would charge, the logical outcome of the administration’s permissive view of “enhanced interrogation.” He told me that he lamented it as the “despicable conduct” of a few “knuckleheads.” When the news broke, he worried that people would think prisoner abuse was part of White House policy, which, in fact, many people did. “We had worked very hard to do what was right,” he told me, “and now everyone would assume this was a by-product of what had been authorized.”

And that's it for the article. Which torture memos was Swartz asking Gonzales about? Dunno. Why was torture Constitutional when it is clearly banned by statute? Dunno. Why am I telling you this? Oh, because of this:

Will Bunch expands the point to indict the political culture of the entire country on seemingly unrelated terms:

A point that I would, again, call Kierkegaardian. I hope to explain that meaning soon. But for now, the beat goes on. And the country, apparently, keeps marching to it.

An update, because it just gets better:

However, the Times acknowledged that political circumstances did play a role in the paper's usage calls. “As the debate over interrogation of terror suspects grew post-9/11, defenders of the practice (including senior officials of the Bush administration) insisted that it did not constitute torture,” a Times spokesman said in a statement. “When using a word amounts to taking sides in a political dispute, our general practice is to supply the readers with the information to decide for themselves. Thus we describe the practice vividly, and we point out that it is denounced by international covenants and in American tradition as a form of torture.”

The Times spokesman added that outside of the news pages, editorials and columnists “regard waterboarding as torture and believe that it fits all of the moral and legal definitions of torture.” He continued: “So that's what we call it, which is appropriate for the opinion pages.”

I remember Ted Koppel interviewing Jon Stewart during the Democratic Convention in 2004. The exchange went something like this:

Ted Koppel made the distinction between fact and truth, using himself as an example. [Actually, Ted Koppel told Jon that he was confusing "truth" with "facts."] What if, he said, President Bush revealed at the convention that Ted Koppel is a "drug dealer and pedophile." Would it be a fact to report that the President said that?

"There is a difference between facts which are reported immediately [and the truth]," Koppel said. "The truth may not catch up for another week or two."

Except what I remember Koppel saying was that he'd report what Bush said, and let someone else refute it. Later. Much later. Long after the lie was half-way 'round the world. Because, like Lara Logan, his duty is not to the truth, nor to his audience. In fact, let me just point out it can be done. People can be called on their lies:

Brewer nonetheless stuck by the claim that undocumented immigrants are murdering Arizonans when asked about it last weekend on a local Arizona political show.

"Our law enforcement agencies have found bodies in the desert, either buried or just lying out there, that have been beheaded," she said.

The anchor notes that he couldn't find "any beheadings in any kind of news search."

The Arizona Guardian followed up, asking the state's county coroners -- who would examine any body connected with a crime -- if they'd seen the headless bodies from the desert.

A newspaper investigates, a reporter in real time challenges a statement. Was that really so hard?

Apparently for Ted Koppel, this violates some journalistic standard of "objectivity." Kinda like the New York Times here. I know this idea of the "objective journalist" gained traction after the "yellow journalism" days of William Randolph Hearst, but honestly, hasn't it become more of a detriment than a benefit?

Andrew Sullivan is right: this is newspeak. This is using words, or reporting (take your pick), dishonestly, so as not to offend those in power. And really, it doesn't even have to be this way; except, one has to admit, the Governor of Arizona is not exactly a "position of power." Not in national politics.

There is no truth in this kind of 'objectivity," and none to be found through it. Truth can only be found in spite of it.

God save the Republic. Something tells me I'd better activate my prayer capsule....