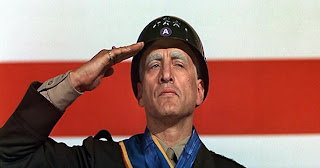 Preparatory to July 4th, and another round of tales about how many people died for "our" freedom, I remembered this line from the speech that opens the movie "Patton." It's the thing we don't focus on when we praise those who "died" for our country, as if their deaths were not intimately connected to the deaths of others. Every time we praise someone for "dying" for their country, we really mean to praise them for killing for their country, for making other people die.

Because if freedom is secured only through war and bloodshed, that's how it's done.

The whole question of whether we exist as a country because of our military, or our military exists because we are a country, is another matter. As is the question of whether the military should exist apart from the citizenry. As Andrew Bacevich points out, the "Greatest Generation" signed on for the duration; not for life, or until retirement. We seem to have lost our way on that, too.