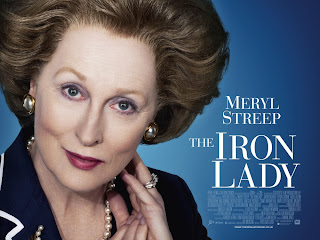 I've just finished watching (on DVD) "The Iron Lady," and much of the history of Thatcherism it presents there oddly enough explains the predicament we are in today; especially Thatcher's determination to make her conservative principles work despite all evidence to the contrary.  When the '80's boom in Britain finally happens, one has very little reason to believe, from the film anyway, that Thatcher's policies had anything to do with it.  But one can also see how the resolutely anti-Keynsian Thatcher has set the standard for the Western world in response to a much more serious crisis today.  She could not, Meryl Streep declares, allow Britain to go bankrupt.  Well, until it was time to go to war over the Falkland Islands (interesting aside, that).  But helping the people of Britain, who were losing their houses?  She knew the price of milk and butter (the grocer's daughter), but what did that matter when they couldn't pay for their homes?

Which brings me 'round (more or less) to this comment from Windhorse:

Paul Ryan undercuts his own appeal to Catholic social doctrine as a justification for his budget a number of different ways. Firstly, his stated concern has always been about balancing the budget as a routine matter of "fiscal responsibility." He never appealed to the concerns of the poor prior to his (conveniently timed) rebuke by the bishops and it's pretty clear that his attempt to portray his budget as some kind of passive social activism is just as cynical a move as theirs.

Secondly, if his Catholicism is really that primary in his life then I would think his faith would require him to withdraw or at least radically rework his budget in favor of the poor out of obedience to his spiritual leaders. Crickets on that front. While I understand his mocking retort about "some people" thinking that they've owned Catholic social doctrine in this country was directed at the liberal nuns, it may as well have been directed at the bishops whom he is disinclined to obey.

And finally, his budget actually takes what is an historically low tax burden for wealthy and LOWERS it even more, cutting out all sorts of revenue streams the government has collected for years while balancing that by cuts to programs the poor rely on. How the hell can he pretend with a straight face that he is working on behalf of the poor when he is actually giving a preferential option to the rich? Why not maintain social programs, cut defense, and raise taxes if you have such solidarity with the poor?

So I guess this is just my long-winded way of saying that I don't take his words at face value and that I believe that Paul Ryan is a lying sack of shit who could not care less about the struggling and impoverished, at least not if their continued existence is going to sustain that irritating bugaboo of big government.

It's that "routine matter of 'fiscal responsibility' which is the lingering stench of Thatcherism, because Meryl Streep's Thatcher is no more concerned with "the struggling and impoverished" than Paul Ryan is, especially "if their continued existence is going to sustain that irritating bugaboo of big government."  People must fall in favor of the Big Idea.

Which, to bring it back around, is where I part ways with the Bishops, or anyone who insists abstract notions must, in any case, in even one case, trump the needs of any given individual.  And yes, I know how radically unethical that statement sounds.  But I say it as a pastor, and defy anyone to tell any individual in ethically complicated straits the dogmatic doctrinaire line to that person's face in the very moment of crisis.

If you do so, and don't feel you did something wrong, you are the one who is ethically compromised.  Which is not to say the proper response is whatever you think that person wants to hear.  But if you do not, in that moment, understand that you are now in a foreign country where you don't speak the language, that you are, in fact, wholly in another person's life which is not your own and when the crisis has passed they have to live with their decision, but you do not, not ever, not for one moment.....if, as I say, you don't understand that simple existential fact; then your ethics are worthless.  They are a clanging gong and a rattling cymbal, and nothing more.

To deal in abstractions is to insist the world conform to you.  To find the world will no more conform to you than it will stop turning, is the beginning of wisdom.  To insist on pain for others that doesn't fall on you and yours at all, is the root of sinfulness.

There is no other honest way to put it.  Margaret Thatcher, like Paul Ryan, was shielded by her position, and her ideology.  We who have tried to help the living keep from dying in the trenches, do not salute them.