They'll know we are Christians by our....Maundy Thursday 2012 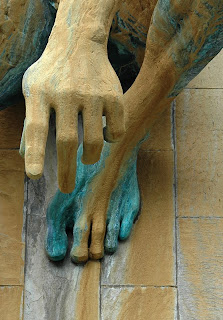 12:2 This month shall mark for you the beginning of months; it shall be the first month of the year for you.

12:4 If a household is too small for a whole lamb, it shall join its closest neighbor in obtaining one; the lamb shall be divided in proportion to the number of people who eat of it.

12:5 Your lamb shall be without blemish, a year-old male; you may take it from the sheep or from the goats.

12:6 You shall keep it until the fourteenth day of this month; then the whole assembled congregation of Israel shall slaughter it at twilight.

12:7 They shall take some of the blood and put it on the two doorposts and the lintel of the houses in which they eat it.

12:8 They shall eat the lamb that same night; they shall eat it roasted over the fire with unleavened bread and bitter herbs.

12:9 Do not eat any of it raw or boiled in water, but roasted over the fire, with its head, legs, and inner organs.

12:11 This is how you shall eat it: your loins girded, your sandals on your feet, and your staff in your hand; and you shall eat it hurriedly. It is the passover of the LORD.

12:12 For I will pass through the land of Egypt that night, and I will strike down every firstborn in the land of Egypt, both human beings and animals; on all the gods of Egypt I will execute judgments: I am the LORD.

12:13 The blood shall be a sign for you on the houses where you live: when I see the blood, I will pass over you, and no plague shall destroy you when I strike the land of Egypt.

12:14 This day shall be a day of remembrance for you. You shall celebrate it as a festival to the LORD; throughout your generations you shall observe it as a perpetual ordinance.

116:2 Because he inclined his ear to me, therefore I will call on him as long as I live.

116:15 Precious in the sight of the LORD is the death of his faithful ones.

116:17 I will offer to you a thanksgiving sacrifice and call on the name of the LORD.

116:19 in the courts of the house of the LORD, in your midst, O Jerusalem. Praise the LORD!

1 Corinthians 11:23-26
11:23 For I received from the Lord what I also handed on to you, that the Lord Jesus on the night when he was betrayed took a loaf of bread,

11:24 and when he had given thanks, he broke it and said, "This is my body that is for you. Do this in remembrance of me."

11:25 In the same way he took the cup also, after supper, saying, "This cup is the new covenant in my blood. Do this, as often as you drink it, in remembrance of me."

11:26 For as often as you eat this bread and drink the cup, you proclaim the Lord's death until he comes.

John 13:1-17, 31b-35
13:1 Now before the festival of the Passover, Jesus knew that his hour had come to depart from this world and go to the Father. Having loved his own who were in the world, he loved them to the end.

13:2 The devil had already put it into the heart of Judas son of Simon Iscariot to betray him. And during supper

13:3 Jesus, knowing that the Father had given all things into his hands, and that he had come from God and was going to God,

13:4 got up from the table, took off his outer robe, and tied a towel around himself.

13:5 Then he poured water into a basin and began to wash the disciples' feet and to wipe them with the towel that was tied around him.

13:7 Jesus answered, "You do not know now what I am doing, but later you will understand."

13:8 Peter said to him, "You will never wash my feet." Jesus answered, "Unless I wash you, you have no share with me."

13:10 Jesus said to him, "One who has bathed does not need to wash, except for the feet, but is entirely clean. And you are clean, though not all of you."

13:12 After he had washed their feet, had put on his robe, and had returned to the table, he said to them, "Do you know what I have done to you?

13:14 So if I, your Lord and Teacher, have washed your feet, you also ought to wash one another's feet.

13:32 If God has been glorified in him, God will also glorify him in himself and will glorify him at once.

13:33 Little children, I am with you only a little longer. You will look for me; and as I said to the Jews so now I say to you, 'Where I am going, you cannot come.'

13:35 By this everyone will know that you are my disciples, if you have love for one another."

This became the first of months for the Hebrews (later the Jews). And the observance of passover became a perpetual ordinance for them. But we Christians preferred the words of the synoptics, and of Paul, over the words of John. So many of us profess to love John 3:16; but so many of us completely overlook John 13. So many of us overlook the sacrament that wasn't.

It wasn't always so. Once upon a time, the kings of England had beggars brought in on Maundy Thursday, and the king washed their feet and gave them gifts. "Whatever you did for the least of these, you did for me." But the gifts were easy, the footwashing was hard; and soon the practice devolved into simply giving the poor some gifts. "This do in remembrance of me." And we knew we were Christ's disciples, because we were generous; because we gave what was, really, most valuable to us. We gave some of our stuff.

Not that it was much, in the strictures of the gospels. John the Baptist told us we only needed one coat, that the other should go to our brother or sister who was naked. John the Baptist also told us we only needed the food we could eat today, that the extra should go to our brother or sister who was hungry. The Hebrew Scriptures were behind both of those challenges, too. They were challenges to our justice, to bring our justice in line with God's justice. But it's easier to blame God for injustice, to wonder why God doesn't do something about injustice in the world, and then to enjoy our comforts even more, because they are ours, and are unknown to others. And certainly the greatest comfort of all is that we only have to show hospitality to our friends.

In Jesus' day, as we all know, washing your guests' feet was a sign of hospitality. Palestine was a dusty land, people walked about in sandals, washing the feet was a kindness and an act of favor. But it was done, when it was done, by servants; never by the host. No host would stoop to take of his guest's sandals and pull up the bowl and bring out the towel and go to work. That was a menial task; it was suited only to those lowest on the social and economic ladder. It was only just that they be assigned such tasks.

Today we don't wash each others feet; but neither do we clean each others toilets. That's a menial task. We pay janitors to do that; and to scrub the bathroom floors in our public buildings. We would never think to do it for them; or even to do it just once ourselves. It's a menial task, a degrading task, a filthy task.

Perhaps that is closer to what footwashing was about. We can hardly imagine it, today. I thought, once, of doing the practice on my Church council, on Maundy Thursday. No one wanted to subject themselves to the intimacy of it. To take off their shoes, to take off their socks or hosiery, and let me touch their feet. It was too much; it was too awkward; it was unacceptable. I've seen it done in some churches, but it's always the priest or pastor, and the church leadership: the very people with the power to make the priest's life miserable, or remove him altogether from his place (I speak of Protestant churches, obviously). Not exactly the equivalent of Christ and his disciples; and never can you imagine the entire congregation being involved in it.

It's not that it isn't important. John put this on the last night of Jesus' earthly life for very good reasons. There is no "Last Supper" in John's gospel, no breaking of bread, no offer to take his body and eat it, to drink the wine that is now his blood and remember him whenever you do this. There is a progression, though. The gospels are oddly connected, but the connections teach us something.

Mark's gospel is the oldest of the four, which makes it the earliest. Two days before Passover, according to Mark, a woman enters the room and breaks a jar of pure nard over Jesus' head. The disciples object, but Jesus says "what she has done will also be told in memory of her!" (Mark 14:9b, SV)

Matthew picks up the story, and keeps all the major elements from Mark, even connecting it to his burial. Luke has the story, too, but he makes radical changes in it.

The connections are obvious: the homeowner is still Simon, but now he is a Pharisee, not a leper. And a woman enters, angering the company, but now she washes Jesus' feet, and there is no mention of burial, no reference to death; only to love. John picks up on that reference, but recovers the perfume from the synoptics; and he names the woman (Mary, the brother of Lazarus). Oh, not here. In chapter 12; but Mary anoints Jesus' feet, not his head. John picks up that theme of love, and the connection to washing the feet, in the passage we have for this Maundy Thursday.

This is, for John, an act of love because it is an act of humility. It is an act attached to the actions of a woman earlier in his story, because Jesus does what is a servant's work, and women used to service might well think of perfuming the feet of someone they greatly admired, of someone they loved. A man would only do that in absolute privacy, or perhaps in great contrition. This is part of the new commandment Jesus gives his disciples: the commandment to love one another, as he has loved them. And that love is not just an abstraction; not just a nice thought or a hopeful goal or a wished for consummation. That love is action, and that action is not just in caring and sharing but in humility and contrition. It is in intimacy, but not the intimacy we today associate with love. This is the intimacy of touch, but a touch combined with absolute humility. This is the humility of absolutely being last of all and servant of all.

But is it? Is it too much to ask, if only once a year, to humble ourselves, and to wash each others feet? Really, physically, truly; to kneel down and wash the feet of those around us in the pews, to do to them and accept having it done to us, to recognize the Christ in all we see, and humble ourselves. "If you know these things, you are blessed if you do them."

Surely that is not too hard a blessing to seek.