Donald Trump is NOT a puppet! 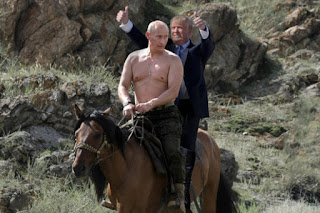 He just plays one when it comes to Putin and Russia:


When I said in an interview that Putin is "not going into Ukraine, you can mark it down," I am saying if I am President. Already in Crimea!
— Donald J. Trump (@realDonaldTrump) August 1, 2016

And, just after that:

So with all of the Obama tough talk on Russia and the Ukraine, they have already taken Crimea and continue to push. That's what I said!
— Donald J. Trump (@realDonaldTrump) August 1, 2016

Well, this, actually, is what Trump said:

STEPHANOPOULOS: They took away the part of the platform calling for the provision of lethal weapons to Ukraine to defend themselves.

Why is that a good idea?

TRUMP: Well, look, you know, I have my own ideas. He's not going into Ukraine, OK?

Just so you understand. He's not going to go into Ukraine, all right?

You can mark it down and you can put it down, you can take it anywhere you want.

TRUMP: OK, well, he's there in a certain way, but I'm not there yet. You have Obama there. And frankly, that whole part of the world is a mess under Obama, with all the strength that you're talking about and all of the power of NATO and all of this, in the meantime, he's going where -- he takes -- takes Crimea, he's sort of -- I mean...

TRUMP: I'm going to take a look at it. But, you know, the people of Crimea, from what I've heard, would rather be with Russia than where they were. And you have to look at that, also.

So with all of these strong ties to NATO, Ukraine is a mess. Crimea has been taken. Don't blame Donald Trump for that.


Who is blaming Donald Trump?  Instead, he blames Obama; but he never acknowledges Russia is in Ukraine; he just says "Ukraine is a mess."  He still apparently doesn't understand that Russia is in the Ukraine, basically daring the world to go to war with them over half of Ukraine.  Which Trump alone could stop?  Or push back?  Because the world is not enough, but Trump is?   This is important not because of Trumpian bluster, but because that exchange started with this:

I was also right about the fact that NATO, we're being taken advantage of by NATO countries, totally advantage of (INAUDIBLE)...

STEPHANOPOULOS: Then why did you soften the GOP platform on Ukraine?

TRUMP: I wasn't involved in that. Honestly, I was not involved.

STEPHANOPOULOS: Your people were.

STEPHANOPOULOS: Do you know what they did?

TRUMP: They softened it, I heard, but I was not involved.

Which is the Ronald Reagan defense in Iran/Contra:  he was just the President, he wasn't really in charge.  Oddly, though, he defends the position his people took; he just disavows responsibility for it.