Gee, maybe it is Bush's fault 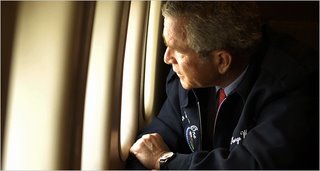 Apologists for the administration will doubtless claim that blame for the lack of progress rests not with Mr. Bush, but with the inherent inefficiency of government bureaucracies. That’s the great thing about being an antigovernment conservative: even when you fail at the task of governing, you can claim vindication for your ideology.

But bureaucracies don’t have to be this inefficient. The failure to get moving on reconstruction reflects lack of leadership at the top.

Mr. Bush could have moved quickly to turn his promises of reconstruction into reality. But he didn’t. As months dragged by with little sign of White House action, all urgency about developing a plan for reconstruction ebbed away.

Mr. Bush could have appointed someone visible and energetic to oversee the Gulf Coast’s recovery, someone who could act as an advocate for families and local governments in need of help. But he didn’t.. How many people can even name the supposed reconstruction “czar”?

Well, at one point, if memory serves, it was Karl Rove.

This incompetence, by the way, is so obvious even AP can casually report on it:

President Bush marks the anniversary of the hurricane that still haunts his presidency with worries a new tropical storm could bring the first test of his promise that the botched post-Katrina response will not be repeated.

....
Bush's trip is his 13th to the Gulf Coast since Katrina, and his first in over three months. The highlights this time are a pair of speeches, one each in Mississippi and Louisiana.

He wasn't bringing any new aid announcements or fresh policy proposals. Instead, the president was hoping the addresses would persuade local residents and doubters elsewhere that he remains committed to seeing the region rebuilt better than before.

As long as you blame your local leaders, not W.:

On one matter that has become a subject of some finger-pointing between Washington and the region, aides said Bush would stress that the states and local governments need to do their part to get federal money to victims — an unmistakable jab at leaders in Louisiana and New Orleans, where federal money for citizens to rebuild homes has not yet begun flowing.

So far, Congress has approved $110 billion in hurricane aid. The Bush administration has released $77 billion to the states, reserving the rest for future needs, but $33 billion of that has not yet been spent.

Don Powell, Bush's federal Gulf Coast coordinator, also warned in an interview that no more money would flow to the region until there is proof that what has been approved is being well-spent.

"It's now time for the people to demonstrate they're going to use this money wisely," he said in an interview. "We need to see plans, execution."

Because we're sure not going to see it from Bush.

Bush's itinerary looks a lot like previous trips, many of which have been criticized as featuring too much staged contact with supportive locals and overly dominated by meetings with officials.

He is spending a little more time freely roaming Mississippi than harder-hit, less-recovered New Orleans. On Monday, after lunching with community leaders in Biloxi, Miss., he was to walk through a damaged neighborhood and visit a Gulfport company that builds and repair boats.

And just to underline a point I've made before:

His approval ratings have never rebounded from their post-hurricane plummet. A New York Times/CBS News poll conducted this month found that 51 percent of those surveyed disapproved of the way Mr. Bush had responded to the needs of hurricane victims, a figure statistically no different from last September, when 48 percent disapproved.

Now: what are we going to do for New Orleans and the Gulf Coast? Easy to criticize the Administration; harder to have the heart open to tragedy, open to hope. But it is having that heart which is going to make the Gulf Coast recover, and get us involved in it.