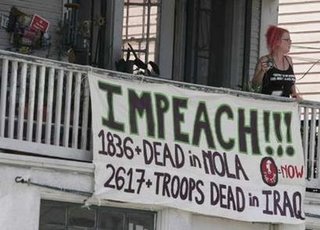 (Picture courtesty of No Capital)

Asked by the anchor whether he was asking people in the country to sacrifice enough, he replied briskly, “Americans are sacrificing — we pay a lot of taxes.”

The video is here. No. 7: "Americans are sacrificing."

The dead in New Orleans, on the Gulf Coast, in Iraq, in Afghanistan? No. The dislocation of millions, the loss of cities and villages on the American Gulf Coast from Beaumont to Bilox? No. The sacrifice is the money we spend. Taxes. That's how this President measures sacrifice.

'On Margate Sands.
I can connect
Nothing with nothing.
The broken fingernails of dirty hands.
My people humble people who expect
Nothing.'
la la

To Carthage then I came