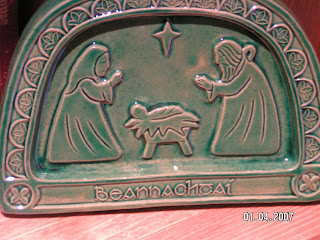 They constantly try to escape
From the darkness outside and within
By dreaming of systems so perfect that no one will need to be good.
--"Choruses from 'The Rock'"--T.S. Eliot

When I mentioned this before, I ended on a note about clergy driving schism which directed the discussion toward clergy responsibility, and not toward the question of denominational identity. Now Father Jake gives me the opportunity to revisit the issue:

'At least two-thirds of the worshipers are Methodists, Presbyterians or Baptists, and there is no pressure on them to be confirmed as Episcopalians, said the Rev. Rick Wright, associate rector.

'Wright said the diverse membership of both congregations illustrates one of the great changes in American religion of the past half-century: The divisions between denominations are far less important today than the divisions within denominations.

' "I tend to feel very comfortable rubbing shoulders with folks at McLean Bible or Columbia Baptist . . . that are real orthodox, evangelical, biblical churches," said Truro's chief warden, or lay leader, Jim Oakes, referring to two Northern Virginia megachurches. "We share core beliefs. I think I would be more comfortable with them than with anyone I might run into at an Episcopal Diocesan Council meeting." '

It appears that 60% of the members of these congregations had no interest in living into the expectations of what it means to be an Episcopalian. It is not surprising that they would vote to leave TEC, since they were never a part of it. One wonders if this congregationalist approach to defining membership will be embraced by Abp. Akinola?

I agree with Jim's comment; "...it seems to me that it relieves us of the responsibility of listening to these folks when they start lecturing us about what it means to be truly Anglican."

Need I say my sentiment is Fr. Jake's? That this is why I want to be (and now am) an Episcopalian? Precisely because of the strong sense of denominational identity?

Glancing through the comments there (always instructive) I, of course, agree with Mimi:

Perhaps the scales will fall from at least a few eyes and make it plain that this is not at all about Anglicanism, but about POWER.
Grandmère Mimi

But I'm not sanguine about a solution which relies on the system to carry the water for us, such as re-emphasizing confirmation (one commenter calls it the "sacrament of confirmation," but so far as I know, neither the RC nor any Protestant church has ever considered confirmation a sacrament, and it's my understanding that the TEC follows the Protestant idea that there are only two sacraments: baptism and communion.) My church allows all baptized Christians to come kneel around the sanctuary (properly, the area around the altar), not just those confirmed in the TEC, else I'd have not been able to take the eucharist there these past several years. Exclusion and control, in other words, is not the answer. That's the power seeking of those who want to remove Truro and Falls Church from TEC.

The curious factor here is the culture. As Fr. Jake says in comments there:

It could be argued that one of the problems with Christendom today was that once it made its way into Northern Europe, the intense catechumenate process that was the norm in the Mediterranean world was dropped. If the king became Christian, everyone did. At some point the bishop would ride by and bless them. That was "confirmation." Thus, the old Gods simply got new names. Thor became Jesus, for instance, which led to bizarre manifestations of Chritianity as seen in the "warrior monks" of the Crusades, or in the General Boykins of today.

Cultural Christianity, of course, is still another topic. But many of the comments at Fr. Jake's sight focus on confirmation because it offers the opportunity for education. Education is another two-edged sword, however, if it is used as a weapon rather than a tool.

As a weapon, education becomes indoctrination, and the goal is to make the members of the group think approved thoughts and, in essense, think as we approve. At the extreme, we end up with those who should never share my hearth, never think my thoughts; the very antithesis of Christianity, in other words. Jesus never asked those he healed about their faith, nor required any doctrinal statement from them. And when he was himself exclusive, he was abashed by the answer. So we have no warrant for exclusion based on education; but we still have a warrant for education.

Which returns the discussion to the church leadership. richard, in commentsat Fr. Jake's, gets it right, I think:

Most people, confirmed or received or neither, in the churches I've been in are not so concerned about denominational issues and tend to engage most of their gifts in a congregationalist manner.

It's up to the leadership, then, to help them see their gifts (or not) as part of the action of the greater Body of Christ. . .or, in the case of Truro, Falls Church, et. al., to paint up the greater church as apostate and lead the congregations out. And they have the liberty (and responsibility) to paint up "Anglicanism" -- often an abstract ideal in many parishioners' minds -- however they see fit.

It is ultimately a question of the church we maintain. Despite the fact the TEC is an episcopally structured, rather than congregational. church, it is still the obligation of the laity, as well as the clergy, to maintain that church. No system or doctrine or polity will do it for us, and it is the fact the church is constantly being renewed, and constantly in need of construction. We are never handed a finished product we must preserve like a museum piece. We are given a living instituion which we must constantly recall to life.

I'm less than sanguine about the whole benefits of education, as the Christian fundamentalist movement began in this country in reaction to the biblical scholarship coming out of Germany in the 19th century. To this day you can still start a lively discussion on whether the Bible is a compilation of sources such as the "Q" document, or whether it is the inerrant word of God delivered to humanity just as we have it today (and apparently unaltered by translations or the myriad documents from which our Bible is compiled. Just look at the number of source documents cited in a Nestle-Aland Greek New Testament, to put to rest any idea that the scriptures are, or ever have been, from a single source.) Will further education convince the fundamentalist she is wrong about the inerrant and absolute transmission of the word of God from Jesus to her? So when we say "education" and mean "Teach these people to think as I do." we are back to doing what Mimi properly described the members of Truro and Falls Church doing: seeking power. Education must flow from acceptance of the doctrine, polity, and traditions of the church, and an insistence that these things matter. But there's another question, one we would do well to answer wisely: why do they matter? Because they keep congregations like Falls Church and Truro from having power?

But this is the situation the church is always in:

Of all that was done in the past, you eat the fruit, either rotten or ripe.
And the Church must be forever building, and always decaying, and always being restored.
For every ill deed in the past we suffer the consequence;
For sloth, for avarice, gluttony, neglect of the Word of GOD,
For pride, for lechery, treachery, for every act of sin.
And of all that was done that was good, you have the inheritance.
For good and ill deeds belong to a man alone, when he stands alone on either side of death.
But here upon earth you have the reward of the good and ill that was done by those who have gone before you.
And all that is ill you may repair if you walk together in humble repentance, expiating the sins of your fathers;
And all that was good you must fight to keep with hearts as devoted as those of your fathers who fought to gain it.
The Church must be forever building, for it is forever decaying within and attacked from without;
For this is the law of life; and you must remember that while there is time of prosperity
The people will neglect the Temple, and in time of adversity they will decry it.

Not bad for someone who wasn't a cradle Anglican, huh?