Irrationality is a force that gives us meaning 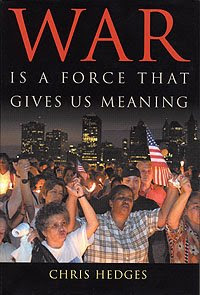 I realize I've been down this road once or twice before (and I really need to go back and tag all the 2746 posts in this blog; maybe when I can afford to hire a secretary...), and some will disagree with me, but Anthony McCarthy, in comments here, put me onto Chris Hedges new book, I Don't Believe in Atheists. I have to admit I hadn't heard of it, and I missed this interview with Hedges in Salon last March. I am correcting that oversight now, because I love what Hedges has to say.

The Enlightenment was both a curse and a blessing, because it was really a reaction to the kind of superstition, intolerance, bigotry, anti-intellectualism of the clerics, of the church. But it also ended up with the Jacobins, [who said] well, if we can't make certain segments of the society "civilized," as we define civilization, then they must be eradicated, in the same way that you eradicate a virus.

I write in the book that not believing in God is not dangerous. Not believing in sin is very dangerous. I think both the Christian right and the New Atheists in essence don't believe in their own sin, because they externalize evil. Evil is always something out there that can be eradicated. For the New Atheists, it's the irrational religious hordes. I mean, Sam Harris, at the end of his first book, asks us to consider a nuclear first strike on the Arab world. Both Hitchens and Harris defend the use of torture. Of course, they're great supporters of preemptive war, and I don't think this is accidental that their political agendas coalesce completely with the Christian right.

Now, the most interesting thing from a blogging point of view, is the reaction to the Hedges/Hitchens debate on the intertubes. I Googled "Chris Hedges Hitchens" and found this Salon interview. I also found a lot of other stuff, most of which seems quite impressed with Hitchens rhetorical skills, but paying no attention to what Hedges or Hitchens actually said. My favorite is this one:

The arena where this pivotal re-alignment took place was the King Middle School auditorium in Berkeley, where far-left "progressive" journalist Chris Hedges formally debated iconoclastic "neocon" pundit Christopher Hitchens. (Videos of the debate and photos from the event can be found below.) The topic of the debate was "Is God...Great?", a riff on the title of Hitchens' new book, God Is Not Great.

Surprising as it might seem in a contemporary political landscape where mocking religion is an established liberal pastime, and where Christianity and spirituality are most often associated with conservatism, it was Hitchens -- now loathed by the left for not toeing the party line over the Iraq War -- who attacked religion, while the neo-Socialist, anti-patriotic, radical Hedges volunteered for the seemingly topsy-turvy position of having to defend spirituality and the existence of God.

How did this strange state of affairs come to pass? In one word: Islam.

The left -- of which Hitchens was a part until recently -- has always been anti-religion. But now, they've become caught in a philosophical bind: how can they promote multiculturalism -- and by extension all non-Western cultures, such as fundamentalist Islam -- if they condemn religion in general? Neocon pundits have since 9/11 frequently accused the left of being in bed with Muslim extremists, a charge which the left has vehemently denied. But with every denial their position was becoming more and more untenable, as the verbiage and narratives of Islamic radicals and "anti-war" progressives have grown to become virtually indistinguishable.

Someone had to take the lead and resolve the dilemma that the left had created for itself. And so it was Hedges who stepped forward in this debate to test the waters for the first time, taking what is for him (and the left) a revolutionary position: that spirituality and religion -- with the noteworthy exception of organized Christianity -- is good.

Now, at no point did Hedges state that he was performing this amazing flipflop specifically due to Islam. He didn't need to say it -- because Hitchens said it for him. In fact, Hitchens repeatedly tore the roof off of Hedges' carefully constructed rhetorical edifice, saying aloud the exact thoughts that Hedges and the left didn't want anyone to hear.

"Pivotal re-alignment"? How did I miss that? Anyway, follow that reasoning carefully, because you won't find it in the Hedges interview. In fact, here is what Hedges says:

A lot of the book is devoted to making this comparison between Christian and what some call secular fundamentalists, but you are pretty hands off when it comes to fundamentalist Islam.

It seems to be, from scanning those entries on Google, the standard take on this debate (which, below, would not surprise Chris Hedges, nor does it surprise me). And I will admit I haven't watched those debates and carefully analyzed them for coherence by either party; life is simply too short. But taking that comment as representative of the pro-Hitchens side of the Hedges/Hitchens debate (and is it any coincidence that the neo-con line is that any sympathy for Islam is sympathy for the devil?), consider this by Hedges on his debates with both Hitchens and Sam Harris:

Do you think the new atheists are similarly uninterested in their impact? It seems that what the New Atheists write and say is somewhat a performance.

Well, not Harris. Harris is just intellectually shallow. Harris doesn't know anything about religion or the Middle East. For Hitchens, it's about a performance, and that was true when he was on the left. He hasn't changed. It's all about him. It's all about being a contrarian. He reminds me of Ann Coulter, he's that kind of a figure. He's witty, and he's funny and insulting. You know I debated him, and in the middle of the debate he starts shouting, "Shame on you for defending suicide bombers!" Of course, unlike him, I've actually stood at the edge of a suicide bombing attack. That kind of stuff is just ... it's the epistemology of television. They make a lot of money off it, but it's gross and disgusting and anti-intellectual and not at all about real discussion.

Do you think Hitchens really believes what he writes?

It's actually the "suicide bomber" line I want to focus on. That is a classic (pardon the pun) "bomb throwing" technique, the kind that is Hitchens stock and trade. It's also, as Hitchens says, "the epistemology of television." When was the last time any of us stood at the edge of a suicide bombing attack? I think at the very least, before we start throwing such claims around, we should consider our own authority on the subject. Hedges makes this point a bit earlier in the interview, in even better language:

I spent so long in war zones that I think we don't know what we would do under repression and abuse -- you know, if somebody killed my father. That's the brilliance of the great writers on the Holocaust, like Primo Levi and [Bruno] Bettelheim. They understood the humanity of their own killers. That line between the victim and the victimizer is razor-thin. We all carry within us the capacity for abuse, and I think that's the most disturbing lesson you walk away with when you cover wars. We're all capable of evil, under the right circumstances, and very few of us are immune.

Such understanding, of course, is anathema to Hitchens. As Hedges says, and it could be said about the entire "New Atheists" debate as conducted by Harris, Dawkins, and Hitchens: "it's gross and disgusting and anti-intellectual and not at all about real discussion."

But these debates, as he points out, are seldom about listening; they are just about shouting:

We had over 1,500 people at the debate at UCLA, and I think that the people who came liking Sam Harris left liking Sam Harris. I don't think that they heard a word I said, and it's just insulting ... I've debated Christian fundamentalists, and it's the same. I can get up and say, look, I grew up in the church, I went to seminary. No, I'm part of the forces of godless secular humanism that are trying to destroy Christians, and they just repeat it like a mantra -- half of their audience which came to hear them hears it, and the same is true of the New Atheists.

Now I will say I haven't encountered too many "audiences" like that in left blogistan, mostly because you can avoid them as easily as encounter them. I pick where I read and comment, as life is too short and I don't have the public platform Chris Hedges does. Still, it is nice to read something like this once in awhile, to hear a truly rational voice that not only has knowledge, but reasoning to support it. It's almost like being back in seminary.