The Peacock Spreads His Fan 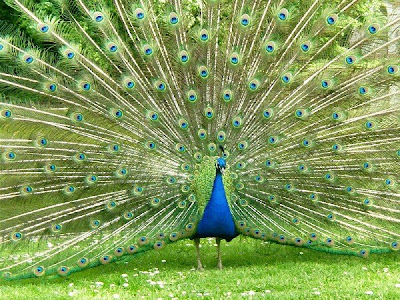 I agree with Atrios: our public discourse is usually pretty stupid. That depends, though, on who gets to control the discourse; and while that control has seemed to be in the hands of the MSM, the Corporate Media, FixNews, or Chris Matthews, of late that control is clearly slipping.

Take the case of the Rev. Jeremiah Wright, who was supposed to outrage all of white America with the selected bon mots replayed ad nauseum on 24 hour cable news. Didn't exactly set America on fire, even when one of the more outrageous things he was supposed to have said was that America was complicit in 9/11. Of course, he wasn't the only person to have said that, but the "frame" was that this was an outrageous notion no "true" American could countenance, and certainly none of the usual suspects among pundits did. As Josh Marshall said, the Rev. Wright was on the way to being radioactive among the pundit class.

So how do we explain this?

When it comes to the Axis of Evil, a little diplomacy can go a long way. According to the latest Gallup Poll the number of Americans who view North Korea as our greatest enemy has dropped by half in the last year. In fact, North Korea isn’t even any longer in the top three. Thanks to diplomatic agreements reached concerning their nuclear weapons program, the percentage of Americans viewing North Korea as our biggest threat has dropped from 18 percent to 9 percent.

Who’s the new number three? China with 14 percent. North Korea has dropped to number four with its nine percent rating. Number five is a tie between Afghanistan and us! That’s right, three percent of the people surveyed see the United States as its own worst enemy.

Read the comments: most agree the greatest threat to the US is...us. For various reasons, but the finger pointing out means three more pointing back, and yet no one seems to consider themselves a subersive or a terrorist lover. 3% is hardly a majority, of course, but it's interesting that it shows up at all. Will anyone cry foul? Will this become evidence of perfidy among patriots? Will the pundits chew this over endlessly, and demand the traitors be ferreted out and removed from civilization?

Of course not. Cafferty already made the obvious reference, on air, to Pogo's dictum about the enemy and us. 3%, in fact, seems like a darned healthy number to me. Not too many, but not too few; and ahead of Russia. I'm not sure what to make of those who think Iraq is a threat, except as perhaps it saps our resources, both human, material, and financial, a rat hole of waste and perpetual destruction for no purpose. In fact, put those two numbers together, and you get a picture of a very wise and worried body politic.

Which might make you think the stupidity of our national discourse isn't so persuasive or pervasive, after all.