Once or twice before, I've mentioned a picture published in the UCNews, the "house organ" of the United Church of Christ. In an odd moment of serendipity, I found that picture at last, over at Sadly, No. Here it is: 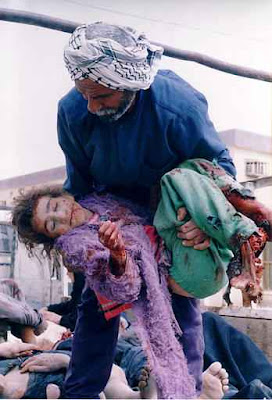 It's even more horrific in color than it was in black and white. But this is war; this is reality. This is what we do to other people in the name of national security, or freedom, or revenge, or self-preservation. This is "collateral damage," this is the face of the "unfortunate" families we apologize to when our "smart bombs" aren't smart as we are sure they must be. These are the people hurt when George W. Bush says "bring 'em on." When Bush says this:

“Kick ass!” Bush said. “If somebody tries to stop the march to democracy, we will seek them out and kill them! We must be tougher than hell!”

“There is a series of moments and this is one of them. Our will is being tested, but we are resolute. We have a better way,” Sanchez quoted the president as saying. “Stay strong! Stay the course! Kill them! Be confident! Prevail! We are going to wipe them out! We are not blinking.”

I've recently received an e-mail, one that purports to tell me the sender declines to engage in "guilt by association," but he has found a website on the "truth" about William Ayres, whom Obama, per the e-mail, now considers "mainstream." I deleted the e-mail as cleverly disguised spam, but couldn't help thinking: why is Bill Ayers still subject to vilification 40 years later, but when George Bush does this over 1 million times, for both Iraqis and US soldiers (IED's are no less destructive than smart bombs, no less reprehensible), why isn't he hounded to the edges of respectful society and considered a pariah to the end of his days?