Connecting nothing with nothing 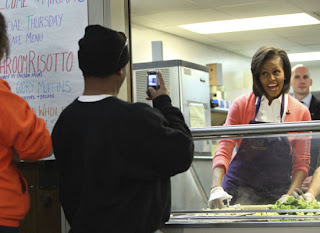 Searching for something (anything) to bitch about when it comes to the Obama's, Andrew Malcolm seizes on Michelle Obama serving food at a homeless shelter to point out that some filthy homeless person is taking a picture of the First Lady with a cellphone. Blissfully unaware of cheap disposable cellphones that can be purchased anywhere, Malcolm wonders where the disgusting parasitic poor have their phone bills delivered. Later Malcolm will review older pictures from the last Republican Depression That FDR Was Responsible For and wonder why all the poor guys begging for bread were wearing such spiffy suits and nice hats.

Though it may seem strange to own a cell phone when you don't have a roof over your head, homeless advocates say the phones are becoming increasingly important to people living on the street.

They offer the best chance homeless people have at getting a call back from a potential employer. They are the most reliable way to stay in touch with family members who don't live in the area.

I don't envy this man's situation, whatever it is, and don't mean to make light of it. But we are a blessed people when our poor have cell phones.

And consider how truly ignorant we are about the nature, and relativity, of poverty.

It is undoubtedly true that the truly grinding poverty found in India or other countries outside the U.S. (Latin America isn't really that far away, but you'd think it was another world in a distant galaxy) is not present even in the Appalachians where our politicians no longer go. Poverty, however, depends as much on the society as on the conditions under which one lives. As the story points out, some people are only homeless briefly; and some people are among the working poor, and need a phone just to keep working at even a marginal level. The assumption that "poverty" must mean "complete lack of all material things except clothing" (because that would lead to public indecency!) is the head-banging-on-the-desk problem here. But it's something more than that (c'mon! It's me! You knew it would be!)

It's the fact that we identify people in this country with their economic status. We hold them morally accountable for their poverty ("Rabbi, who sinned, this man or his parents, that he was born blind?" We're still asking that question.), and then hold them even more accountable if their poverty is not "poor" enough for us. It's money that matters, and we judge you according to how you use yours. Poverty is a social condition that puts us in charge of your life, and allows us to judge how you live in your poverty. Your money is, ultimately, your identity. If we strip you of all your money, we strip you of your identity, too. Your self-worth, your integrity, your self-esteem: all belong to us. Everything has it's price, and when you are poor, when you are impoverished and have to go to a soup kitchen to hope as kind and beautiful a woman as Michelle Obama smiles at you and serves you a hot meal, then you must certainly pay the piper, and you are more clearly a commodity than at any other time or position in your life. We own you, because you have become a public figure: you are poor. You are more nakedly dependent on our largesse than the rest of society, so you are ours, and we will exact our payment for our charity.

These material questions are bound up with spiritual questions. We can't consider one topic, without considering the other.