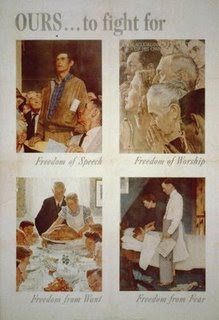 ...or it is nothing at all."--Jacques Derrida

It is tempting, but also tempting misinterpretation, to speak of morality and ethics in terms of religion. But religion is first and foremost about responsibility, not about personal benefit. And responsibilty was exactly what Jon Stewart demanded of Jim Cramer last night.

Mr. Stewart didn't present it as a religious issue, but he challenged the selfishness, the amorality, of business news reporting which Mr. Cramer's show characterizes. As Jim Cramer himself acknowledged, he made money in a hedge fund for years, long before his TV show. The show for him is not a necessity; it's a rich man's hobby. As Stewart said, it's a "game."

Except it isn't. The disconnect between Cramer's bubble and the world the rest of us live in couldn't have been clearer last night. And it's not surprising a comedian, a clown, was the one to show it to us. There is plenty to say about the place of the fool, about the role of the trickster, the joker in the pack, the revealer of the lies we all live by, until they fail us. The jester is the outsider, the one who throws darts at our inflated complacency, who punctures the balloons of our self-righteousness.

But he can also be a moral agent. There is an old Christian tradition regarding Christ the Fool. It is of a piece with the paradox of the power of powerlessness. Mr. Stewart has no power, other than his soapbox. He doesn't direct people in how to live their lives or structure their behavior, either personal or financial. What he does is hold accountable those who do, much like the court jester, or even the trickster. The ancient "Feast of Fools" was a way of doing this. It was a way of recalling us to the real value of morality, even to the kerygma of the basiliea tou theou, where the first are last, and the greatest of all is the servant of all. Consider the value of that, apart from any particular religious claim it might have. Consider the value of humility, the power of a critical moral stance.

Consider what Jon Stewart did last night. His jokes earlier stirred a tempest in the cable TV teapot. Now we'll see whether his serious questions stir any self-reflection in those who consider themselves the ruling class. And whether they stir any consideration of an ethic, a morality, that is more transcendent than the questing after status, the interests of the shareholders, the competition with the other traders and multi-millionaires.

Nothing sweeping, of course, will happen. Even after the emperor was mocked for parading naked, he simply ran inside and put on clothes. He was still emperor; nothing fundamentally changed. But it's good to tell the truth, anyway. Truth is its own reward. Now we'll see how much it changes things; and especially, how much we demand that it change things.

In the final analysis, it's always up to us.