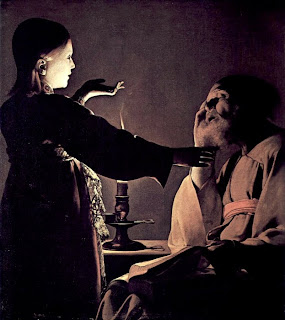 7:11 Ask a sign of the LORD your God; let it be deep as Sheol or high as heaven.

7:13 Then Isaiah said: "Hear then, O house of David! Is it too little for you to weary mortals, that you weary my God also?

7:14 Therefore the Lord himself will give you a sign. Look, the young woman is with child and shall bear a son, and shall name him Immanuel.

7:15 He shall eat curds and honey by the time he knows how to refuse the evil and choose the good.

7:16 For before the child knows how to refuse the evil and choose the good, the land before whose two kings you are in dread will be deserted.

80:2 before Ephraim and Benjamin and Manasseh. Stir up your might, and come to save us!

80:4 O LORD God of hosts, how long will you be angry with your people's prayers?

80:5 You have fed them with the bread of tears, and given them tears to drink in full measure.

80:6 You make us the scorn of our neighbors; our enemies laugh among themselves.

80:17 But let your hand be upon the one at your right hand, the one whom you made strong for yourself.

80:18 Then we will never turn back from you; give us life, and we will call on your name.

Romans 1:1-7
1:1 Paul, a servant of Jesus Christ, called to be an apostle, set apart for the gospel of God,

1:2 which he promised beforehand through his prophets in the holy scriptures,

1:3 the gospel concerning his Son, who was descended from David according to the flesh

1:4 and was declared to be Son of God with power according to the spirit of holiness by resurrection from the dead, Jesus Christ our Lord,

1:5 through whom we have received grace and apostleship to bring about the obedience of faith among all the Gentiles for the sake of his name,

1:6 including yourselves who are called to belong to Jesus Christ,

1:7 To all God's beloved in Rome, who are called to be saints: Grace to you and peace from God our Father and the Lord Jesus Christ.

Matthew 1:18-25
1:18 Now the birth of Jesus the Messiah took place in this way. When his mother Mary had been engaged to Joseph, but before they lived together, she was found to be with child from the Holy Spirit.

1:19 Her husband Joseph, being a righteous man and unwilling to expose her to public disgrace, planned to dismiss her quietly.

1:20 But just when he had resolved to do this, an angel of the Lord appeared to him in a dream and said, "Joseph, son of David, do not be afraid to take Mary as your wife, for the child conceived in her is from the Holy Spirit.

1:21 She will bear a son, and you are to name him Jesus, for he will save his people from their sins."

1:22 All this took place to fulfill what had been spoken by the Lord through the prophet:

1:23 "Look, the virgin shall conceive and bear a son, and they shall name him Emmanuel," which means, "God is with us."

1:24 When Joseph awoke from sleep, he did as the angel of the Lord commanded him; he took her as his wife,

1:25 but had no marital relations with her until she had borne a son; and he named him Jesus.

They constantly try to escape
From the darkness outside and within
By dreaming of systems so perfect that no one will need to be good.
--"Choruses from 'The Rock'"--T.S. Eliot

Keep awake! That's the message of Advent, the theme of the liturgical season. But if Joseph had not slept....

Jacob Marley tells Ebenezer Scrooge that humans are supposed to go out as far and wide as possible among their fellow men, and offer what aid and comfort they can to each other, and if they fail to do so in life, they are doomed to do so in death. It's a rough kind of justice, but a fair one, at least. It isn't a punishment imposed by a wicked and angry deity, it is a balance imposed by the conditions of human existence, and you will do it now, or you will do it later. Jesus was a wanderer, an itinerant preacher, they taught us in seminary, a man with no home and no fixed abode, never knowing where he would sleep the next night after the morning he woke up. Was Dickens thinking of Jesus when he wrote?

Probably not that particularly. And certainly, Dickens' Carol fits very easily into a secular seasonal celebration rather than a religious one: Scrooge's "conversion" is not based on a religious experience; the only mention of the reason for the celebration is made at the Cratchit home. Still, the central vision of homelessness: what can it mean? If we don't go out from our comfortable areas in life, we can never be comfortable in death. It's a very dark strain in the story, indeed. But not dark because it is cosmic punishment for miscreants, but because it is a necessary condition of human existence, and you do it now, or you do it later: but you must do it. And if Scrooge had not slept....

When his sleep is interrupted, Scrooge learns to see himself as others see him. He learns to see the truth. When Joseph's sleep is interrupted, he learns the truth, too. And it is a sign, even though he didn't ask for one; but then, neither did Scrooge. Content in his miserly existence, Scrooge is happily as solitary as an oyster. Content in his normal existence, Joseph is content to quietly set aside the engagement to Mary, so as little scandal will attach to her as possible. But then he sleeps....

Keep awake!, we are told during Advent. Keep awake! Is it an order to never sleep? Or to pay attention to what signs may come? The "virgin" in Isaiah is actually a young girl, not a sexual neophyte, When God promises that a young girl will have a child, God is promising that the race of Israel will go on, that life will return to normal, that salvation will come to the besieged city of Jerusalem. The child will be a sign that God is with us. Ahaz doesn't dare ask, and the refusal to take God's offer seriously is what annoys God: "Is it too little for you to weary mortals, that you weary my God also?" So Jacob wails when Scrooge refuses the favor of the ghostly invaders of his sleep. It is not for us to deny what is offered to us, when it is offered for us. We who are so sure some system, be it business, be it culture, be it a deus ex machina, will save us from ourselves, will finally be so perfect that we only need to keep putting one foot in front of the other to obtain the desired goal; we are the ones who need to keep awake! And we are the ones who need to listen, when our dreams are invaded.

It's only a little time now until the event we have been waiting for. Will we be awake for it? Scrooge wanted his business to be so perfect he didn't need to be good, and he thought he'd managed it. He wanted to stay in his office and deal with his numbers and let that be his salvation, and in the end he finds out the shattering truth: that his salvation was in the people he encountered, and in the life he lived among them. His salvation was in the young girl giving birth to a baby, further proof that, even in the darkest times, God is with us. His salvation was in being a community member with that baby, and with all the babies, young and old. Scrooge slept through his life until, in one night, on one Christmas Eve, he was woken up. After that, he never slept again. Joseph slept through his life until, in his dreams, he was woken up, was shown his connection to all humanity, was shown his value and strength and necessity. Our spirits must always walk out among the living; they will do so in life and in death. Joseph may not be real; Scrooge may be only a fictional character: but their spirits walk out among us every year, and bring comfort, and bring lessons, and tell us to stop relying on systems and be good by doing good.

This year, maybe we can keep awake for them.