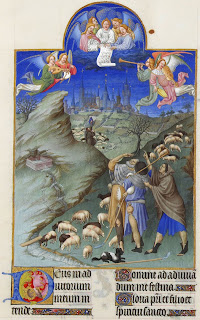 The model for the Orthodox service is the throne room of God, which is largely the model of the liturgical practice of Christianity (taken from Isaiah's vision of God, where the prophet is commissioned to preach to Israel on God's behalf). But in the Orthodox tradition, there is a screen between the altar and the people, the latter standing about as if in a king's court, waiting for an audience.

The priests conduct the service on the other side of the screen from the congregants. At midnight, a priest comes around one edge of the screen, and whispers to those standing there. In a wave, a ripple of sound and action, the Word literally becomes flesh again, as the message is passed from ear to tongue, and tongue to ear: