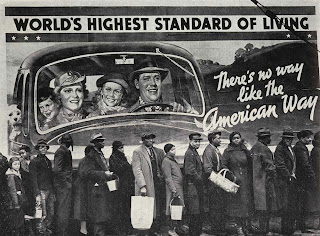 Some of us are living longer. Some of us aren't. The World Bank shows a rise in American life expectancy of almost 9 years over 5 decades. That helps put Mississippi in perspective. They aren't enjoying that rise in longevity, or if they are it is up from a deep bottom indeed. The reasons are stark, but we don't want to talk about them. We'd rather talk about budget deficits and reducing government spending 10 years from now (the money we're spending now was committed years ago). We'd rather be innumerate and stupid about statistics and look around and see our rich, privileged friends are living longer, so this must be the best of all possible worlds. I am reminded again of who Jesus of Nazareth ate and drank and talked with, and who he didn't. Life expectancy was probably greater for the wealthy in Rome and Palestine, too, than it was for beggars and fishermen and carpenters.
Posted by Rmj at 4:36 PM