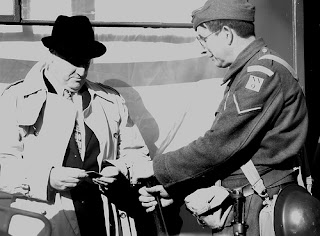 I understand the concept of reasonable suspicion:

A standard used in criminal procedure, more relaxed than probable cause, that can justify less-intrusive searches. For example, a reasonable suspicion justifies a stop and frisk, but not a full search. A reasonable suspicion exists when a reasonable person under the circumstances, would, based upon specific and articulable facts, suspect that a crime has been committed.

The problem for me with the 11th Circuit's ruling on Alabama's immigration law is that, under Federal law, entering this country without permission is not a crime. There's also the basis of the "reasonable suspicion." It's never going to fall on me; I look as white as my Anglo-Irish heritage can make me. No, reasonable suspicion in this case is always going to come down to one thing:

"If they see me they will think I'm suspicious and then they will detain me indefinitely," Gomez says.

Why would the police think she was suspicious? "They will see the colour of my skin."

So, will we, as a nation, institutionalize racism in the name of border security? Yes, I'm afraid we will. Why? Well, because of the court's ruling:

The Obama administration asked the court to step in last week, arguing that the law encourages discrimination and subjects state residents to unwarranted scrutiny from local officials.

I'm sure the court thinks the concept of "Reasonable suspicion" is the legal fig leaf that makes this ruling justifiable. But a police officer can always manufacture an excuse to stop someone who "looks illegal," and once that is done, the "reasonable suspicion" that they are in the country illegally can be as simple as skin color.

But that's okay. We have a border to secure.