Is "Messy" Messianic? And other useless considerations.... 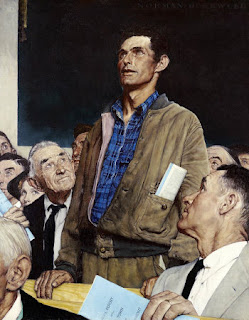 I was directed here by starting here, so first, my thanks to both Ann and Mimi. But what I'm most interested in is here, something Harvey Cox said 12 years ago. But to simply put the matter in context:

Still, the liturgy of The Market is not proceeding without some opposition from the pews. A considerable battle is shaping up in the United States, for example, over the attempt to merchandise human genes. A few years ago, banding together for the first time in memory, virtually all the religious institutions in the country, from the liberal National Council of Churches to the Catholic bishops to the Christian Coalition, opposed the gene mart, the newest theophany of The Market. But these critics are followers of what are now "old religions," which, like the goddess cults that were thriving when the worship of the vigorous young Apollo began sweeping ancient Greece, may not have the strength to slow the spread of the new devotion.

Opposition to the "liturgy of The Market" is currently being pronounced by the "Occupy Wall Street" movement, which is spreading out to occupy other places as well. But the narrative of the movement is not yet 'crystal clear' enough to fit on a bumper sticker, so the media seems most concerned about how incoherent the movement is. At first I wondered: so what was the single, coherent message of the Hoovervilles? But after reading Cox's argument, I'm thinking: the message is coherent, but like the message of the Church, it isn't being spoken in the language of the world.

I'm a supporter of the traditional liturgy of the church, the ancient practice, much modified but much the same, handed down from the Roman Catholic observances. Most pastors I know, especially in my denomination, disagree with me. They insist such practices are too arcane and archaic, and must be discarded in favor of newer, more appealing styles of worship. It would seem to be an argument just about styles, then: whether I wear a robe or alb, a tie or a collar, a business suit or an open necked polo shirt, surely what matters is what is said, not how it is said. Right?

But if what I say is in the language of the world, is entirely in the "liturgy" of the world, am I not speaking in terms of the world? Reports coming from the Occupy Wall Street movement are that it is radically democratic. At least, "radical" as we have come to understand democracy. But we forget America is not a democracy; it is a democractic republic. We are far more Roman than Greek, and while they Greeks gave us the concept of the "demos," the Romans taught us to organize a republic. We are as much a republic as Rome once was; the main difference is, we are more democratic than Rome ever was. But we still assume we must speak with one voice in all matters; and so pundits bewail "partisanship" and the "lack of civility" that prevents everyone from agreeing that we should be at war in Vietnam, or in favor of waiting for civil rights to be granted to African Americans, or go slower on granting just voting rights to all Americans, or....

You get my point.

The Occupy Wall Street "movement" seems to be less about recreating the democratic republic in miniature, and more about reclaiming the ancient Greek ideal of "democracy." It is not unknown in this country, the idea that democracy means listening to all the voices of all the people. The man standing at the town hall meeting is a citizen entitled to be heard like very other citizen, where the vote is a consensus of those gathered, not the decision of representatives. If Occupy Wall Street doesn't have one message to convey, that is because it is conveying a message by what it is rather than just by what it says. Ironically, in this web-linked and internet besotted age, actions still speak louder than words. And trying to reduce actions to words is as much a distortion as trying to reduce the parables of Jesus to simply moral homilies.

The parables, in fact, are a good example of what I mean. Simple tales told about ordinary events, but tales charged with extraordinary and seemingly contradictory meaning. Jesus' parables take the everyday life of his original audience and fill it with wonder and paradox and even confusion. How can a father honor a son's outrageous request for his half of the estate when his father still lives, and how can that father welcome that same prodigal son home? But how can the brother stand outside and not share in the celebration, and at the same time, how can he go in and accept what the father and his brother have done? Isn't there a simple meaning to this tale, something we can fit in a bumper sticker? There is, by now; but it distorts the tale to render that "simple" meaning. It fits the tale, in fact, into the language of the world, rather than leaving it in the language of the parable.

So to speak in the liturgy of The Market is not to challenge the basic presumption of The Market as God; it is only to seek to reform the presumption so it better serves our preferences and comforts. But there's nothing preferential or comfortable about camping out in a public park for three weeks, demanding attention and advocating for change. The Market expects activities to pay dividends, to reap rewards, to at least incur profits. In The Market, even time is for sale, and the coin of purchase has to have meaning in The Market, or there is no purchase possible, no transaction can occur, no purpose can be identified. If the activity does not have a Market purpose, what purpose is there to it?

Does everything, then, have to have a Market purpose? Does all liturgy, all human action, have to speak in terms of the World to be understandable? And if it does, can it radically challenge the World? Or can it, at best, only seek to reform it, to tweak it, to modify it, however slightly?

"What life have we if we have no life together?" In the NPR story, some of the occupiers of Wall Street noted the irony of protesting corporations while using Verizon to live stream the protest marches and so bypass any coverage or lack of coverage the media might (or might not) provide. But if the message is not about damning the corporation outright, perhaps the message is, in part, about the right use of the corporation. "Liturgy", after all, is the "work of the people." To work is to be in the world (the example of Christ led even the scholarly monks of Medieval Europe to labor as well as study); it is not necessarily to be of the world, however. But to speak in the liturgy of the church is to speak a rich language; one, however, comprehensible to the Church, if not to the world. But what does it mean to speak in the liturgy of The Market?

To speak in the liturgy of the Church is to make the Church and its traditions paramount, if not necessarily supreme. To speak in the liturgy of The Market is to make The Market paramount, if not necessarily supreme. Which, however, should be necessarily supreme: God? Or The Market? Perhaps not even God (there is no reason to make Occupy Wall Street a wholly Christian movement), but what substitute for The Market can be offered? The demos? That would seem to be what Occupy Wall Street wants to offer, and it's a very reasonable substitute to The Market. But The Market speaks in terms of "bottom lines," of DJIA closes and stock prices and valuations that are definable if not final. The Market wants a single, simple, marketable narrative. Democracy, on the other hand, especially direct, unfiltered democracy, is messy.