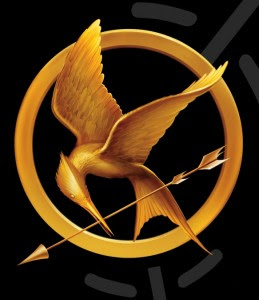 First, I'm excited by the trailer, as it appears to be a picture and note-perfect representation of the world of Panem as I imagined it. Yes, the name of the country is Panem. It is what is left of the United States after war and global warming have taken their toll on the population and the available living space (think of losing the coasts and the Gulf reclaiming as much of Texas as it once covered. There's nothing specific about that in the book, but it's a fair representation).

The world of Katniss (more on the names in a moment) is District 12, a coal mining region that's probably in the Appalachians. There are 12 districts, down from 13. There is a Capital, probably in the Rocky Mountains (none of the familiar names apply anymore. Again, more on that in a moment.), and every year there is a "Reaping," where two children of a certain age group (see the trailer or the books for such details) are chosen by drawing to go to the Hunger Games, and fight to the death in an arena. The survivor is excluded for life from the Games, and is set for life, as well. Their district is rewarded with riches (usually food) for a year, until the next Games.

At the time of the book, this has been going on for 75 years.

All wealth and power flows to and from the Capital. Districts most supportive of the Capital benefit the most, and each district provides good, or Peacekeepers (soldiers), or fuel (coal), etc., to the Capital. Think of all roads leading to Rome, except Rome is set off from the rest of the empire, the empire is divided into distinct districts, and travel between districts is impossible, except with permission of the government in the Capital. All means of transport are controlled by the Capital, too, as well as all energy supplies (electricity, etc.).

The comparison to Rome, you may have guessed, is not accidental. The country is Panem. Many of the people in the Capital have Roman names. Caesar. Cressida. Troilus. Katniss is named for a plant that grows in District 12, as is her sister, Primrose (Prim). It's never explicit, but Katniss is cat-like; she is practically "cat-ness". She is a hunter (a predator); she is a loner (she can barely make an emotional commitment to either of the two boys who feature in the story); she is a survivor (9 lives). She also hates her sister's cat, who returns the sentiment. They are too much alike, you see.

But Katniss is who she is because of Panem and the Games. Her father dies in the mines when she is young, her mother withdraws in shock and pain, and Katniss has to hunt (illegally; she's bascially poaching the king's (Capital's) grounds, outside the fence that surrounds District 12) to keep the family in food. Growing up too fast with too many burden, she is forced into the Hunger Games because her sister Prim, the first year she is eligible, is chosen. Katniss volunteers to take her place.

Note this process of selection is called "The Reaping." Those chosen are "tributes." The games are to remind the Districts who is in control. They are run by and for the Capital (whose children are never subject to selection). Reaping means both harvest, and reaping what you sow; a reminder to the districts of the price of rebellion; even after 75 years. "Tribute" is rather more obvious.

The YA (Young Adult) aspect of the novels is that Kat is used, almost from the beginning, as a pawn in several other group's games. Like a teenager, she is held responsible for what she does, but she's never quite let in on what's going on (think Harry Potter and Dumbledore, without Dumbledore's benevolent watchfulness over Harry, or Harry's chance at resurrection). But the even more interesting aspect is the references to Rome.

The books also had some fortunate timing for the author in terms of catching the zeitgeist, since perhaps the core theme is the 99% (the 12 districts) vs. the 1% (Capitol), the poor and underfed vs. the rich and overfed.

But this misses the salient, and subversive, point. The overt theme here is that power tends to corrupt. It corrupts not just the Capital, but the rebellion against the Capital. The subvert theme is that history tends to repeat itself, and it does so for the simple reason that we continue to rely on power to further our own ends. That lesson is expressed most clearly at the end of Mockingjay, the third book in the series, when Katniss finally realizes who she must choose, and why, between the two boys who love her. It is not a romantic moment, to say the least. And it happens because of an act of violence, and the justifications for violence, which justifications always have to do with seizing, or keeping, power. Katniss is not interested in power.

Rome was. At one point a character in the books makes the connection clear: Panem et circenses. The Hunger Games are the gladiatorial bouts that remind everyone who is in charge (gladiators were slaves, not citizens). Everything flows to the Capital (Rome) from even the farthest reaches of Panem (the Empire); and the brutality recorded in the crucifixion of Jesus of Nazareth, the absolute and brutal imposition of the Pax Romana that destroyed Jerusalem in 70 CE, is reflected in the actions of the Capital over the course of the trilogy. There is a Pax Panem.

How clearly does Panem reflect the reality of our world today, with US military bases around the globe and the US Navy that now advertises itself as a "Global force for good", a US Air Force that you would never know flies bombers and drones all over the globe, doing far more damage than one sci-fi plane does benefit? Well, we aren't as brutal as Panem; unless you count torture in Abu Ghraib or in "black sites" around the globe, or the School of the Americas, where we trained the torturers who terrorized the countries of Central America in the 1980's. But these connections take a conscious effort; they don't appear anywhere in The Hunger Games where, as I say, all knowledge of the US and its history have been completely erased.

In that way it is only slightly different from the world we live in. In its simplicity (each district contributes only one thing to the whole, a division of labor that is literally impossible) Panem is a child's idea of a country. In its brutality, though; in its ruthlessness; in its determination to keep the flow of goods and benefits confined to the hands of the few who can appreciate them; in its depiction of a Capital where luxury and waste are bywords (at a feast, the attendants gorge themselves, drink an emetic to vomit, and gorge themselves again; else what's the point?, as one character says); it is a true picture of our world.

Not that it is any more obviously related to us than Omelas is. We see what we want to see; and disregard the rest.