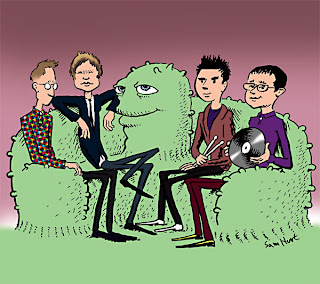 When I was at UT Austin many, many moons ago, the biggest controversy in the Deadly Toxin was the cartoon strip "Eyebeam."

Sam Hurt had a character, Hank the Hallucination, who decided to run for Student Body President. It was good for a laugh; and then Hank won. This, mind, was hot on the heels of the Art and Sausages Party, who campaigned on the promise to replace the motto on the Main Building (the UT "Tower," infamous and famous for other reasons), which read: "Ye Shall Know the Truth, and the Truth Shall Set You Free." Their substitution was the more honest and appropriate: "Money Talks."

Anyway, the victory of Hank didn't sit well with the DT's editor at the time, who took student government far more seriously than law students like Hurt, who knew what governance was really about. So did most of the student body, for that matter.

I recall, too, an editorial cartoon from Berke Breathed, mocking an ad for a real estate development going in just north of Austin (again, this was the late '70's/early '80's). The ad featured a folksy guy in cowboy garb touting the benefits of "Brushy Creek," which virtues included good schools (illustrated by a school bus disgorging white children into pristine suburban neighborhoods). Breathed's version showed this character (in caricature) standing with one foot pushing down the strands of a barbed wire fence as he intoned: "Neighbor. Come on over to the Mushy Creek side of the fence. Ain't no nisgers over here."

30 some odd years later, we get this, which frankly is so racist I'm appalled the DT's editors considered it appropriate even as the personal expression of the cartoonist. That's what web sites are for. But the cartoonist is apparently too young to have grown up with the phrase "colored boy" as anything but an historical term, and to know "Yellow journalism" as only a phrase tossed about when describing news you don't like. I have to consider that the current student editorial board of the Daily Texan is equally naive and historically ignorant.

The cartoonist has apologized, and I take her explanation to be that she knew the terms "colored boy" and "Yellow journalism," but they are historical terms to her, archaic phrases with no more real meaning than "Zounds" or "Bull's pizzle." Except, of course, most of us know what "Colored boy" meant, and means, and many of us understand that "yellow journalism" is closer to what Fox News and NewMax peddle, than what is found in mainstream media. As Rush Limbaugh used to love to intone (before it caught up with him): "Words mean things." Being too historically and culturally ignorant to know when you have picked up dynamite instead of a firecracker is only partially excusable; but it certainly underlines one of my favorite themes: that a little knowledge is a dangerous thing.

Or, that these things that pass for knowledge, I don't understand.