People are No Damned Good! 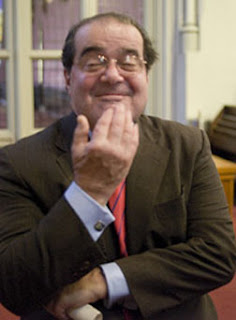 I wasn't going to write about this but I find it hard not to use my tiny platform to raise a peep of protest.

Have we gone completely mad?

“If a man is struck down by a heart attack in the street,” Butler said, “Americans will care for him whether or not he has insurance. If we find that he has spent his money on other things rather than insurance, we may be angry but we will not deny him services — even if that means more prudent citizens end up paying the tab. A mandate on individuals recognizes this implicit contract.”

That is from 1989, from Stuart Butler, founder of the Heritage Foundation. Interestingly, it doesn't require any faith in God to see the legitimacy of the claim (although anyone professing Christianity should see it almost reflexively). I get it via E.J. Dionne, who goes on to point out:

Justice Antonin Scalia seemed to reject the sense of solidarity that Butler embraced. When Solicitor General Donald Verrilli explained that “we’ve obligated ourselves so that people get health care,” Scalia replied coolly: “Well, don’t obligate yourself to that.” Does this mean letting Butler’s uninsured guy die?

I had just heard that line, from Jon Stewart on The Daily Show, when I read this. It confirmed for me a notion that Scalia engages in theater in arguments like this; that he revels in the attention, and only cares that you spell his name correctly, and he enjoys the notoriety, even if it makes him look like a pig. He's a Supreme Court Justice with lifetime tenure; what're you gonna do about it?

But if words mean things, then Mr. Dionne is right, and Justice Scalia's argument is: "Screw 'em. The Federal Government can't help 'em, the States won't: sucks to be you, buddy!"

Slate’s Dahlia Lithwick called attention to this exchange and was eloquent in describing its meaning. “This case isn’t so much about freedom from government-mandated broccoli or gyms,” Lithwick wrote. “It’s about freedom from our obligations to one another . . . the freedom to ignore the injured” and to “walk away from those in peril.”

So this is who we are now: a nation that doesn't give a damn for anybody else, because Trayvon Martin was wearing a hoodie, after all: he asked for it! And "illegal immigrants" aren't really people, they're something less than dogs and cats, so they don't deserve the protection of our laws and our 14th Amendment (which speaks of "persons," not "citizens." The major Constitutional distinction between those classes is that the latter gets to vote; nothing more.), and should be hounded out of our country because we have no room for them, and no compassion, either. This is the country where dumping people from E.R.'s onto Skid Row is just good stewardship of public funds. This is now a country where we aren't obligated to anyone but ourselves and our sense of justice, and if we want to shoot somebody, well that's our God-given right because we have to defend ourselves from black children in hoodies by chasing them down behind a row of townhouses, or just to recover our property, because obviously personal property is more important than human life.

Hell, this is America! Everything is more important than human life!

Really? Is that who we are now?