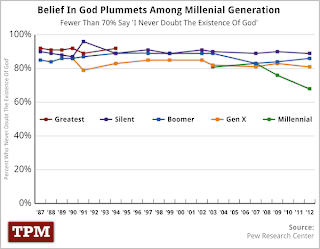 Time once again to ask the perennial question:  "What God do you believe in?"

Oh, no; sorry.  We aren't asking that question.  We're just asking "Do you believe in God?"  Which is the same thing as saying "Do you think God exists?"  Except it isn't, of course.  But that's another quibble.  Let's go to the chart (courtesy, as you can see, of TPM).

Actually, what that chart shows is agreement with the statement "I never doubted the existence of God."  What's funny is how it moves up and down over the years.  I guess God was wiping out the doubters, because it seems they don't live as long as the believers, at least among the "Silent" and "Boomer" generations (Gen X and Millenials are still too young, overall, to have left behind only those who never had a doubt).  Or maybe it's memory, and as you get older, you're less likely to remember your childhood doubts.  Or maybe this just reflects societal changes, and church is no longer the binding force we all thought it was after World War II (church historians will tell you that was the aberration, not the rule.  And even the Puritan colonies of Massachusetts were never the norm for all the settlers in the New World).  Protestant churches especially are the product of culture as much as they are the shapers of culture (the same is true for the Roman Catholic church, but in fundamentally different ways, since the RC is hierarchical and centralized, and most Protestant churches are less so, to varying degrees; and the more hierarchical ones are rapidly giving way to the decentralized and congregational forms).  If the culture has shifted away from the churches, are the churches really to blame?

Well, to some extent, yes.  On the other hand, what you actually see in that chart is the grave difficulty of the modern church.  Look at that chart (or any of the others at Pew) and don't overlook the fact you are looking at five different cohorts, from "Greatest" to "Millenial."  I don't know what "Greatest" covers, since the graph for it ends in 1994, but even leaving them aside, you have four groups that might all coexist under one roof of one church.  And that means you have people who remember (as my last church had) coming to church in a horse and buggy, sitting next to "Millenials" who've grown up knowing man walked on the moon, who may have forgotten there ever was a Soviet Union, who don't know life without the internet or cell phones, and so on.  You have people who consider their private lives private, next to people who think everyone on Facebook needs to know what they were doing in the past hour.*  Now, try relating not just the gospels, but a community life, to those disparate groups.  One will be remembering a past the other knows nothing about, while the Boomer stand in a bridge between people who grew up without TV or maybe even radio, and people who grew up on Skype and Twitter.

You can make too much of these differences; or at least you think you can, until you encounter them.  And trying to keep all those generations under one roof is virtually impossible.  The only churches I see trying to appeal to "Millenials" (if not Gen X, too), I see in ads at the local mall, where everyone is pictured as young and happy and trying to make a religious community out of...well, what, exactly?  Pretty much the thin gruel of God loves you and wants you to have a good time and to make a good marriage and to be a good employee and have nice friends and....

Nothing you wouldn't get as well from an atheist, in other words; or just any community group or self-help guru.  There is a church near me now, a new one, that wants to be my "community church."  They advertise one day of Vacation Bible School (on a Saturday, for no more than 5 hours), and family movies on the third Fridays of the month, or live music on the first Fridays.  Nothing wrong with that, but what do they preach and teach, exactly?  What do they confess?  Are they really any different from any club or business that wants my trade?  How?

Which is not to say I know of any mainline churches which are doing any better.  As I say, they have their own difficult dynamics to work with.  Fewer kids are born into these churches, and fewer of them stay any longer than they have to; which means even fewer of them return when they start families (the safety catch so many denominations rely on).  Church attendance is a cultural matter, but as the culture stops enforcing it, attendance stops occurring.  On the other hand, try to make the church more attractive to Millenials, and the Boomers and Silent generations will quickly let you know who's in charge here!  Which is why the Millenials leave in the first place, making the Boomers and Silents complain that there are no children around anymore.**

I should point out, too, that doubting God's existence, and abandoning the church, are two different things, and that to the extent Millenials are leaving the pews, it's for reasons more complex than a question of philosophy of religion.  If the young are more inclined to doubt God exists, perhaps that is a failure of theology (even though it's not a theological question).  Much to cast down, much to build, much to restore....***

Because none of this is new:

And now you live dispersed on ribbon roads
And no man knows or cares who is his neighbour
Unless his neighbour makes too much disturbance,
But all dash to and fro in motor cars.
Familiar with the roads and settled nowhere.
Nor does the family even move about together,
But every son would have his motor cycle,
And daughters ride away on casual pillions.


But it is the lines that follow which are the most important:

Much to cast down, much to build, much to restore;
Let the work not delay, time and the arm not waste;
Let the clay be dug from the pit, let the saw cut the stone,
Let the fire not be quenched in the forge.


*Which raises an interesting theological as well as sociological issue:  how self important must you be to think everyone else on Facebook (or your "friends," at least) want to know everything you've been up to, complete with pictures?  There is a narcissism that is being fed and encouraged in ways as socially altering as the Boomers who grew up sitting in front of the TeeVee watching "Romper Room" and "Captain Kangaroo."  It is a far cry from the humility traditionally professed in Christianity, and may be another explanation for the decline in the number of Millenials who report they have ever doubted God's existence.

**I speak in generalities, since anyone can cite a church where this isn't happening.  But I think the general observation is supported by the data being reported.  At least, it's one likely explanation.