Can I get off here, please? 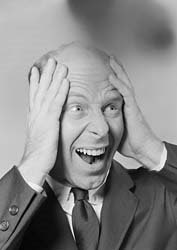 I don't want to comment on the healthcare decision from the Supreme Court today (a/k/a, by absolutely no one, National Federation of Independent Business v. Sibelius, and now you know why), except to note this passage from the dissent:

It is true enough that everyone consumes "health care," if the term is taken to include the purchase of a bottle of aspirin. But the health care “market” that is the object of the Individual Mandate not only includes but principally consists of goods and services that the young people primarily affected by the Mandate do not purchase. They are quite simply not participants in that market, and cannot be made so (and thereby subjected to regulation) by the simple device of defining participants to include all those who will, later in their lifetime, probably purchase the goods or services covered by the mandated insurance. Such a definition of market participants is unprecedented, and were it to be a premise for the exercise of national power, it would have no principled limits.

What color is the sky on their planet?

In what reality are children not participants in the market for healthcare?  Third-world countries?  North Korea, maybe?  Just what in the HELL are they talking about?  (Okay, I want to do more than note this odd argument.  Sue me.).  Are the justices so old or childless they don't recall childhood diseases, injuries, accidents, are unaware of children in hospitals, with cancer or other illnesses?   Tonsillitis, measles, mumps, rubella, diphtheria, tetanus?  Do these words mean nothing to the dissenting justices?  Are they too old to know about ear tubes and ear infections and all the ills young children are heir to?  Do they think children are magically immune to medical needs until they reach middle age, or at least the age of majority when they can buy insurance?  Do they not begin to understand the reason most children in America live to the age of majority is BECAUSE OF HEALTHCARE, NOT IN SPITE OF IT!!!!?????

I don't find this opinion comforting, from a legal standpoint, because I find the argument that the mandate is illegal and unconstitutional frankly bizarre, and saving it by calling it a tax (like Social Security or Medicare) is even stranger; though I'm glad it was saved.  But this idea, that children don't participate in the healthcare market until they are at least legally adults, is just....


Addendum:  There is a cemetery in Nacogdoches, Texas that dates back to the 19th century.  In that cemetery there is a family plot which contains the grave of the father and two of his wives, and all of his children.  As I recall, only one child lived to early adulthood, and all the children from both wives predeceased the father by many years.  He left, in other words, no worldly heirs.

In the cemetery of the church I once pastored, also dating back to the 19th century, there are a number of children's graves, most from the early 20th century.  There is a mass grave there, too, containing children and adults, victims of a yellow fever epidemic.  Modern medicine began pretty much with Fleming's discovery of penicillin, and it has exploded since then.  It is a rare thing, now, to see a child's grave; rarer still to see a family plot filled to overflowing with all the family, the only adults the parents.  That is because of healthcare.

I remember mass immunizations in my childhood for polio, and the vaccines I had to take to ward off diseases my parents feared, that some of my parents peers still suffered from (such as polio.  I still remember iron lungs.).  No one said we were too young to participate in the "marketplace."  No one considered immunization a "mandate" Congress couldn't impose.  It was a matter of public health.  It still is.

To say, with a straight face, at the beginning of the 21st century, that children do no participate in the healthcare market, is like saying vaccines cause autism, or the world is actually flat.  It is a statement with no basis in reality, and marks the speaker as a person with no serious claim to our attention.