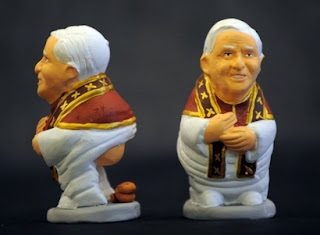 I have no argument with the Pope's newest book, but I have to say, the idea that we don't know the date of Jesus' birth ain't exactly news:

In the Apostolical times the Feast of the Nativity was not observed....It can never be proved that Christ was born on December 25....The New Testament allows of no stated Holy-Day but the Lords-day...It was in compliance with the Pagan saturnalia that Christmas Holy-dayes were first invented. The manner of Christmas-keeping, as generally observed, is highly dishonorable to the name of Christ.

Increase Mather, 1687.  He was wrong about that "Saturnalia" connection, by the way; but it has become a staple of Christmas criticism among the cognoscenti, who have no idea where it came from, but are convinced it's true.  It isn't.

Mather is right, otherwise, and his observation predates historical Biblical criticism by about 200 years.   Christmas itself wasn't observed by the church until the 11th century, with the first appearance of the "Christ Mass."  The date of birth is highly conjectural (most scholars agree we don't know when the birth occurred; the Gospel accounts are too different, and written for very different reasons than historical accuracy.  The idea of such accuracy is, in fact, a Greek notion, not a Hebraic one.  Greek culture suffused the culture of Palestine in the first century (when the Synoptic Gospels were written), but not so much as to make the Gospel writers consider themselves heirs to Herodotus.)  Matthew's nativity story places Jesus firmly in line with Hebrew history and prophecy; Luke's nativity story places Jesus firmly at the bottom of the Palestinian social ladder, down among the shepherds and the ptochoi.  Only Matthew's story, by the way, rests on the idea of a "virgin" birth.  The two accounts, in fact, are reconcilable on only three facts:  the names of the parents, the place of birth in Bethlehem, and the baby's name:  Joshua, or, in the Greek transliteration:  Jesus.

I think the animals at the birth is a bit less poetic license than the Pope does.   But the take away from this seems to be:  now that the Pope has said it, it's true.


Maybe we should ask Sen. Rubio if the theologians are still arguing about it.