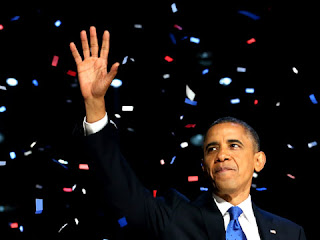 Honestly.  I don't know.  Tell me what you think.

Part of what drives people crazy about him — and if you wanted to see crazy, you should have seen the fugue state that overcame the Fox election all-stars last night, because I've seen jollier police lineups — is that he so clearly understands his own genuine historical stature, and that he wears it so easily, and that he uses it so deftly. It is not obvious. He does not use it brutally or obviously. It is just... there with him, a long and deep reservoir of violence and sorrow and tragedy and triumph out of which comes almost everything he does. He came into this office a figure of history, unlike anyone who's become president since George Washington. The simple event of him remains a great gravitational force in our politics. It changes the other parts of our politics in their customary orbits. It happens so easily and so in the manner of an immutable physical law that you hardly notice that it has happened until you realize that what you thought you knew about the country and its people had been shifted by degrees until it is in a completely different place.


His supporters had counted on him to be Franklin Roosevelt, and to run roughshod over his opponents with policies so popular they became permanent. Instead, his opponents had succeeded in making him pay for virtually every initiative, and by the time he began his campaign for re-election in earnest he had been transformed into a politician who ran not on smarts but on heart; not on eloquence but on will; not on the promise of transcendence but on simple endurance. He had been accused of squandering the demographic advantages of his presidency, and of missing the chance to become a truly transformational politician. But he must have known that if he remained true to the very things his enemies feared in him — his rationalism and modernity — the country could get on with the task of transforming itself, and tonight he celebrated the most sweeping political transformation in American political culture since the one Reagan cemented in his electoral victory of 1984:
He had turned a center-right country into a center-left one.

In the meantime, I got some soteriologizin' to do.

Adding:  one thing I do know about last night:  the polls predicted the outcome almost to the letter (especially Nate Silver), even down to the fact it would all be over before midnight.

Yet even The New Yorker (in the person of Jane Mayer) predicted a voter apocalypse as we faced a sea of Floridas ca. 2000, and law suits that would keep us wondering who won until January or later.

The emerging theme now is that "conservative meda" fooled the rubes into expecting a Romney win.  But who really sat down in front of the TV last night and expected this to be over before the day was?  And who told us all it was really that close?