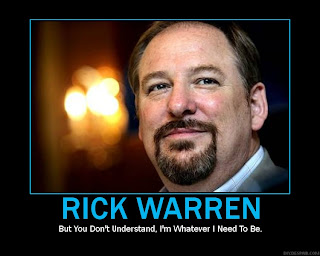 I'm not a critic of Rick Warren, at least not in the sense that I wait for him to say something I can pounce on.  I'm not a fan, either; so I just try to leave him alone.  But once in a while I am reminded, through the example of Rick Warren, why pastors should stick to tending their own garden, as Candide advised, and avoid making public pronouncements they have to walk back at the first sign of challenge:

JOHN BERMAN (HOST): [Tyler Clementi's] parents wrote that they left their Evangelical church recently because they felt the beliefs on homosexuality estranged them from their son, which meant he could not come to them. His mother said this, she said, ‘at this point, I think Jesus is more about reconciliation and love. He spoke more about divorce than homosexuality, but you can be divorced and join a church more than you can be gay and join churches.’
WARREN: Very good point. You know, Jesus taught, as a Christian, I am not allowed to hate anybody. I’m not allowed to do that. In fact, I am commanded by Jesus Christ to love everyone, to show respect to everyone. There’s a difference between acceptance and approval. God accepts me, accepts you unconditionally. He doesn’t approve of everything we do.
BERMAN: But pastor, don’t you think some of our churches are responsible for some of the attitudes towards gays in America, the negative attitudes?
WARREN: Probably, yeah. In fact, there are some people who are extremely violent or hateful. And hate is never of God, never.

Sure is fun to do, though, isn't it, Rick?  Sure is fun to say that being gay is like wanting to punch somebody in the nose. I'm sure it was fun saying that until somebody said "Pastor" and recalled you to your public position and all the obligations that entails, huh?  And when John Berman confronted you with a real-life example of something that sounds so easy in the abstract, you had to crawfish on it.

Happens to pastors all the time, doesn't it, Rick?  We take a firm and bold stance we are sure some portion of our congregation will agree with, and then the individual case steps up and challenges us to put our money where our mouth is, and suddenly that principle that felt so good to boldly proclaim, doesn't feel so good anymore.

My point is this, Rick; Mr. Warren; Pastor Warren:  you speak for a lot of us when you speak.  Not just for evangelical Christians (and some of us in the UCC would still like that word back, thank you very much; you guys have done more harm than good with it), but for Christians generally.  You even speak for religious people generally.  The wide world rather inconveniently divides groups into atheist or religious, in Christian or Muslim or what-have-you, and it doesn't make fine distinctions between evangelicals and fundamentalists and "liberal" Christians and "mainstream" Christians, and the like.  It lumps, and it lumps me in with you, and while it's my responsibility to distinguish myself from you, you've got a burden in this, too.

'Cause, in the end, her song is right:  all you're gonna be is mean.  But you keep making the rest of us look that way; and you make your congregation look like a bunch of knuckle-dragging yahoos who just get together to congratulate themselves on being so rich they could make you rich, too, and their binding principle is not the Gospels, but how much fun it is to hate people who they don't want to like.

I know you want to say there's a distinction between your private opinions and your public statements:


But honestly, who are you trying to kid?   I was never more than the pastor to a few hundred in a church building most people drove by without seeing, and I knew I could never casually discuss my personal opinions with anybody; that every statement I made was a public utterance subject to misinterpretation.  I was never a best-selling author or a pastor famous enough to host a Presidential discussion, or to give the invocation at a Presidential inauguration.  Do you seriously believe you have a private thought anymore, or that what you say to your congregation stays solely within the confines of your congregation? Then might I advise you stop going on CNN and stop releasing new versions of your book?

You're a publicity hound.  You can't excuse yourself by saying what I heard was not meant for my ears.

There is, as you say, a difference between acceptance and approval.  I accept you as a Christian and a person called by God to preach the Gospel, even if I don't approve of the way you do it.  But I gotta tell you, that's not a shield for doing whatever you want and calling it accepted if not approved.  Some things just aren't acceptable, and really shouldn't be.  Paul was actually pretty clear on this; it's why he called his church in Galatia "stupid."  Besides, this isn't the first time you've made a really dickish statement you had to walk back, is it, Pastor?  Like it or not, you're the most recognizable Christian pastor in America today.  More people know you as a Christian pastor than know who Jim Wallis is, or who Barry Lynn is.  Maybe it's time you step away from the microphone and consider what purpose it is that drives your life; and what that purpose should be.

Just a suggestion.  The rest of us are getting tired of bearing the burden of your loose mouth.