"Clap Your Hands for Herod" 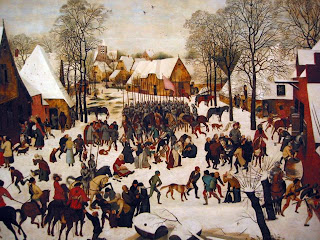 Local school districts should decide their own policies, Perry said. But if someone has obtained a concealed-handgun license, he said, “you should be able to carry your handgun anywhere in this state.” He clarified that private property owners should be allowed to impose their own restrictions.

We the smallest of the dead
once believed in our ignorance
that King Herod
was a wicked man
who had us killed
from mere brutality and lack of heart
But we were told:
Look at the woods you are living in
even the smallest song-birds
snap up insects coloured like the rainbow
to be fattened
for the wild cat's jaws
little snakes swallow mice
big ones rabbits and hares
and when the wolf that devours the sheep
falls sick he is torn to pieces by his brothers
And so it is with the plants and flowers
one strangles another's growth
seizes its piece of earth
and share of the sun

These things they said to us
and we pale-faced little angels
gulping in terror
cowered closer to the tree-roots
and gave thanks
that here in these woods thirsting for blood
we were not really alive
and they went on:
There is no love among men
nor in the world of the living
But King Herod
loved above all else
you little mortals white as the lamb
and therefore freed you from life
that you might be spared
its limitless horrors
Be grateful to your deliverer
and if he comes among you
greet him with clapping and song

who is coming to kill us once again