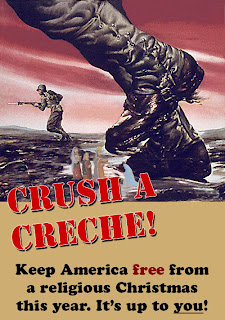 Truthfully, I shouldn't care; but if I have a stake in the "war on Christmas," this is it:

Costa agreed and said that the war on Christmas is not only impacting Rhode Island. "I've been getting emails, calls and letters from all over the country," Costa said. "Why does Christmas have to be attacked? We don't attack any other religion."


Saying "Merry Christmas" is not a Christian blessing.  It isn't even a Christian sentiment.  Putting up a Christmas tree does not make you a Christian, any more than buying Christmas gifts does.  Whether or not you have sponsored a manger scene on a public way since 1945 doesn't make you religious or even a "defender of Judeo Christian traditions."  As the Pilgrims understood, there is nothing particularly Christian about the observance of Christmas; much less about the symbols that identify it.


Christmas day is no religious day and hardly a holiday with them: New-year's day is perhaps a little, but only a little more so. For Twelfth-day, it is unknown; and the household private festivals of birthdays are almost universally passed by unsevered from the rest of the toilsome days devoted to the curse of labor."

And you thought Wal-Mart invented working on a holiday.

Preserving silly things like the label "Christmas tree" is really not a fight anyone needs to have.   I understand if some Jews or Muslims or Buddhists or atheists consider the word "Christmas" to be a religious term.  I'm happy to be diverse enough to call the tree with the glass ornaments or plastic cartoon and TV celebrity figurines a "holiday tree."  But if we're really going to say these things are essentially religious and as such must be removed from the public sphere, or given special protection, then I'm going to declare Christianity dead and the cause of death neglect and ignorance and rampant stupidity.

Because the fundamental teaching of Christianity is not:  "HANDS OFF!  THAT'S MINE!"  And if we're going to insist that it is, we might as well chuck the whole mess and abandon all pretense to caring one whit what Christians believe and hold important.


When ordinary people are running about claiming persecution for their religious beliefs because of "holiday trees," it's kind of hard to lay all the blame on Fox News.  It's also kind of hard to take their claims of "religious persecution" seriously.


Need I remind you, to this good day, that Christmas day is no religious day at all, even when it's on Sunday?

Concluding Unscientific Postscript:  We are so over that "war on Christmas" stuff!