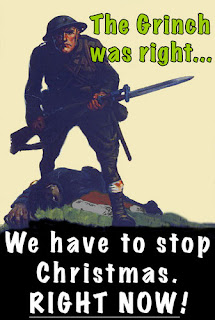 We interrupt this blog to bring you the following paid political announcement:

Let’s unpack this a bit. We all know Republicans want to spend less money. So the  construction of the debate appears, on the surface, to be a pretty simple continuum based on policy preferences. Republicans like Mitch McConnell say government spending is “out of control” and would, at least ideally, like to bring it into line with revenue entirely through spending cuts. Democrats like Obama endorse a “balanced” solution with revenue and taxes. Right-thinking centrists, like the CEO community and their publicists like Mike Allen and Jim VandeHei, think we should cut deeply into entitlement spending while also raising tax revenue. (VandeHei, in a video accompanying his execrable story, asserts, “There’s money to be cut everywhere.”)

There really isn’t money to be cut everywhere. The United States spends way less money on social services than do other advanced countries, and even that low figure is inflated by our sky-high health-care prices. The retirement benefits to programs like Social Security are quite meager. Public infrastructure is grossly underfunded.

That's the nut of a truly excellent analysis of the current "fiscal crisis" by Jonathan Chait.  The basic point is, the Republicans have one choice, which is to follow Paul Ryan and "[kick] the crap out of the poor."  Or you drastically cut defense spending (which is really what the "fiscal cliff" is all about, at least so far as the GOP is concerned).:  unless you eliminate social spending (Medicare being, in some ways, the least of it).  "So, ... if you’re not willing to inflict epic levels of suffering on the very poor, there just aren’t a lot of cuts to be had out there."

The other fun part of the analysis is the evisceration of the execrable Bowles-Simpson "plan".  To start with, it was never a plan.  It falls apart from there, and includes lovely links to things like this:

Bowles-Simpson seems to have been put together backwards.  Instead of starting with a plan about what the federal government should no longer do and then determining the savings from the smaller number of employees that would be needed to do what's left to be done, with limited exceptions the plan focuses on the reduced workforce but makes few assumptions, suggestions, or recommendations about what services the government should no longer provide.  The assumptions it does make don't appear to justify the cuts in the number of employees and contractors.

Most of the thinking about the budget is along these lines:  not only is the problem ill defined, but the solutions don't really make sense:

Republicans and even many centrists like to endorse taking away Medicare benefits from people like Warren Buffett. But even defining “Warren Buffett” at a level way below Warren Buffett’s income level yields pathetically little money. (The very rich have a vastly disproportionate share of income but not a vastly disproportionate share of entitlement benefits, which means taxing them produces way, way more savings than reducing their social spending.) This is why the spending side of the fiscal cliff negotiation is so discouraging. The potential cuts on the table range from fairly painful steps like reducing the Social Security cost-of-living index to even more painful steps like raising the Medicare retirement age, and none of them would save all that much money — certainly not on the scale that Republicans want.

And besides, Social Security doesn't contribute to the deficit.  At.  All.

This all becomes more interesting with the GOP threatening to debt ceiling increase.  The debt ceiling is simply Congress accepting that it has to pay the bills it has already agreed to incur.  Using it to cut future spending is ridiculous, because the past spending was done by Congress in the first place.   And if anyone really doubts the problem with government spending is NOT defense spending:

NORQUIST: We got lots of things Obama claims to be for, and we will make — we, the Republicans in the House and Senate — will make him actually make those spending restraints, in order to get the continuing resolution out [for] a week, two weeks, a month. Obama will be on a very short leash, fiscally speaking, over the next four years. He’s not gonna have any fun at all. He may decide to go blow up small countries he can’t pronounce because it won’t be any fun to be here, because he won’t be able to spend the kind of cash he was hoping to.


Because if we learned anything under Bush, it's that war is free.  People, on the other hand, are too damned expensive!

Get back to your shopping.  What're you, at war with Christmas or something?