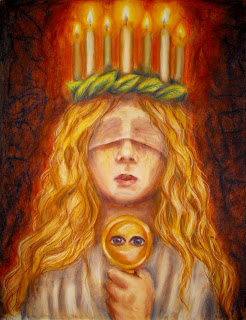 Lucy died during the persecutions of Diocletian at Catania in Sicily, being beheaded by the sword.  Her body was later brought to Constantinople and finally Venice, where she is now resting in the church of Santa Lucia.

Because her names means "light," she very early became the great patron saint for the "light of the body"--the eyes.  All over Christianity her help was invoked against diseases of the eyes, especially the danger of blindness.  The lighters of street lamps in past centuries had her as a patron saint and made a special ceremony of their task on the eve of December 13.

Saint Lucy attained immense popularity in medieval times because, before the calendar reform, her feast happened to fall on the shortest day of the year.  Again because of her name, many of the ancient light and fire customes of the Yuletide became associated with her day.  Thus we find "Lucy candles" lighted in homes and "Lucy fires" burned in the open.  In Scandinavia before the Reformation, Saint Lucy Day was one of unusual celebration and festivity because, for the people of Sweden and Norway, she was the great "light saint" who turned the tides of their long winter and brought the light of day to renewed victory.

A popular custom in Scandinavia on the eve of December 13 is for children to write the word "Lussi" on doors, fences and walls.  With the word always goes the picture of a female figure (Saint Lucy).  The purpose of this practice in ancient times was to announce to the demons of winter that their reign was broken on Saint Lucy's Day, that the sun would return again and the days become longer.

"Lucy fires" used to be burned everywhere in northern Europe on December 13.  Into these bonfires people threw incense and, while the flames rose, trumpets and flutes played to greet the changing of the sun's course.  These fires were greatly valued as a powerful protection against disease, witchcraft and dangers, and people would stand nearby and let the smoke of the incense reach them, thus obtaining the desired "protection."

Lucy, whose day is in our darkest season,
(Although your names is full of light,)
We walkers in the murk and rain of flesh and sense,
Lost in the midnight of our dead world's winter solstice
Look for the fogs to open on your friendly star.

We have long since cut down the summer of history;
Our cheerful towns have all gone out
like fireflies in October.
The fields are flooded and the vine is bare;
How have our long days dwindled,
now the world is frozen!

Locked in the cold jails of our stubborn will,
Oh hear the shovels growling in the gravel.
This is the way they'll make our beds for ever,
Ours, whose Decembers have put out the sun;
Doors of whose souls are shut against the summer time!

Martyr, whose short day sees our winter and our Calvary,
Show us some light, who seem forsaken by the sky;
We have so dwelt in darkness that our eyes are screened and dim,
And all but blinded by the weakest ray.

Hallow the vespers and December of our life,
O martyred Lucy:
Console our solstice with your friendly day.

My candle burns at both ends;
it will not last the night;
But ah, my foes, and oh, my friends--
It gives a lovely light!