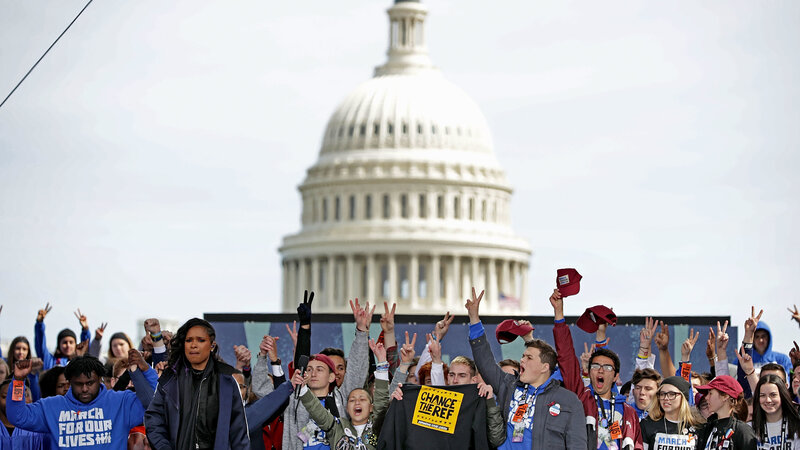 The judges have decided another category has to be opened in the post-March For Our Lives awards.  So, alongside "The NRA Made Me Do It!", we have a new category:  "Madalyn Murray O'Hair and the Supreme Court Made Me Do It!".

First up, thanks to rustypickup, we have Pastor Robert Jeffress (no relation, at all, to your humble host):

“We don’t think there’s anything wrong with that,” he said of the gun control march. “That’s great, but if we’re depending on legislation alone to solve the problem of gun violence, that’s like putting a Band-Aid on a cancer.”

“It doesn’t deal with the root problem,” Jeffress continued. “The root problem is we need to change people’s behavior and that can only happen with a change of heart, and we believe only the gospel of Christ can do that.”

“I would remind people that for the last 70 years there has been a crusade by secularists to remove any acknowledgment from God from the public square, including our schools, saying that we can be good without God,” Jeffress said Sunday. “Well, that’s been a dismal failure.”

He recalled the days when schoolchildren prayed, read scripture and memorized the Ten Commandments in schools, “including the commandment ‘Thou shalt not kill.’”

Which doesn't explain why "godless" countries in Europe, or like Australia, don't have the gun violence America has.  But rather than put a judicial thumb on the scale, let us note that even the wives of disgraced evangelists can play this blame game:

“People have got to address the fact that kids today are being put in school where there’s no morals,” [television evangelist Frances Swaggart] announced. “Because we’ve taken God out of the school. And there’s no resistance then to anything that Satan throws these kids’ way.”

“Today’s gun control and confiscation rally was nothing new,” she added, reading from a paper provided by a fellow panelist. “Nazis and leftists have been using children for decades in their attempts to take guns away from law-abiding citizens.”

“Hitler’s regime took away guns from the people in Germany and then he herded all of those who did not like it into box cars and shipped them to concentration camps where they were enslaved, beaten, raped and murdered,” she said. “The victims didn’t fire a shot in self defense because their guns had been taken away. That’s a fact.”

“And that’s why evil people want to take the guns away from law-abiding citizens here in the United States of America,” the host opined. “Everybody says, ‘Let’s get rid of the guns.’ It’s the worst decisions that could be ever made. Get rid of the guns. No! No! No! Put God back into the schools.”

According to Swaggart, students who survived the mass shooting in Parkland, Florida are being used as “pawns” by liberal billionaires like George Soros.

“What happened with this last school and other schools that have shootings, this is going to happen,” she insisted. “And it causes the people to get upset and it causes the disturbances and then you have what we have had over the weekend.”

Judges consider the violation of Godwin's Law to simply be a two-for.  And for the record, prayer in schools was banned in the 1960's.  Apparently it takes Satan at least 50 years to crank up and get something done.

Lines are open all week.  Operators are standing by.  Vote early and often.