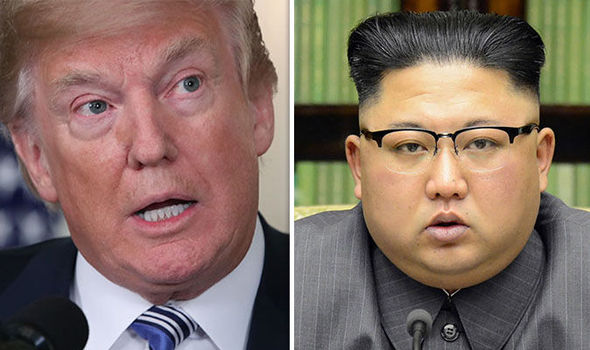 The basic problem with Trump is not that he thinks this way:

So what does Trump hope to get out of this summit? No one seems to know. In an article in Axios titled “Trump’s ‘Great Man’ Play on North Korea,” Jonathan Swan quotes one inside source as saying that Trump views the upcoming summit as “a duel of personalities.” Another source says Trump thinks, “Just get me in the room with the guy, and I’ll figure it out.”

This has long been one of Trump’s basic misunderstandings of international politics: He thinks that everything depends on personal relations (hence the frequent boasts of his “chemistry” with various foreign leaders), when in fact the fundamental cause of cooperation and conflicts is interests.


It is that almost every analysis of Trump thinks he actually believes something closer to the perceived wisdom, he's just not smart enough to close the circle:

On this and many other issues, Trump seems to believe that past efforts—at peace talks, trade deals, wars, or whatever—have failed because past presidents were bad negotiators or plain stupid. Perhaps because he never learned history and doesn’t read intelligence reports longer than three pages, it hasn’t occurred to him that some problems are simply intractable—that, in some conflicts, the best one can hope for is a way to muddle through without provoking too much violence and that sometimes, there’s not much to talk about. In those cases, it might still be worth talking (on the Churchillian premise that talking is better than fighting), but that’s one reason nations have diplomatic corps—to hold talks, test ideas, float proposals, and all the rest, without involving the leader’s prestige. The risk of a summit is that it’s adjacent to a cliff: Failure to mount it properly can result in catastrophe.


"Perhaps because he never learned history and doesn't read intelligence reports longer than three pages"?  Or perhaps because he's doo-dah clueless and has never shown any interest in being educated on a subject.  He thinks it's all about fooling the rubes and making a "deal", where "deal" is something he announces on Twitter after the fact, or in a manner which proves he has no clue what he's talking about.  You know, like this:


Sleepy Eyes Chuck Todd of Fake News NBC just stated that we have given up so much in our negotiations with North Korea, and they have given up nothing. Wow, we haven’t given up anything & they have agreed to denuclearization (so great for World), site closure, & no more testing!
— Donald J. Trump (@realDonaldTrump) April 22, 2018


Trump was referring to news reports of a speech that Kim had given the day before. But an official record of the speech, delivered at a plenary meeting of the Workers’ Party of Korea, reveals that Kim agreed to no such thing.

Rather, Kim said that no further tests of nuclear weapons or medium-to-long-range ballistic missiles “are necessary” (italics added), given that North Korea has “successfully concluded” the process of building a nuclear arsenal. And because of this completion, Kim went on, “the overall situation is rapidly changing in favor of the Korean revolution”—i.e., in favor of North Korea’s triumph.

This is very different from a conciliatory gesture to stop testing. As for closing his nuclear test site, it appears that the site was slated for a shutdown already, having been gutted by the spate of recent weapons tests.

All things the head of the U.S. government should know, or should have people who can tell him.  But Trump is militantly ignorant, and you don't need a Trump biographer to tell you that.  It's clear from his tweets, from his preference for conspiracy theories, from his recent tweets about Comey's "classified memos" and his "criminal acts" in "leaking" them.  Even his favorite network knows that's bullshit.   But Trump doesn't care; and that's the problem.   He shows up for work at 11 a.m., and quits working by 2 or 3 in the afternoon.  These things are public record.  I think by now we can safely conclude that the problem is not  "perhaps...he never learned history," but: clearly, the man is a black hole of knowledge.  And the result of that ignorance is that the only thing new here is Trump's willingness to meet Kim at a meeting of equals, which means Kim has already won, and Trump has already lost, a loss he's already signaled is coming:

True, at a secret meeting with CIA Director Mike Pompeo over Easter weekend, Kim did say he was ready for a “phased” and “synchronized” process toward denuclearization—an expression often invoked by Kim’s father and grandfather, North Korea’s first two rulers. The idea is that the two sides would make simultaneous concessions over a long period of time. For instance, Pyongyang might freeze its nuclear program or admit international inspectors to various sites—in exchange for which Washington would remove some economic sanctions. And in this playbook, denuclearization, if things ever got that far, would involve all countries in the region—including the United States—withdrawing all military forces that had the capability to hoist or fire nuclear weapons.

Yet according to a front-page story in Monday’s Wall Street Journal, Trump will press North Korea to dismantle its entire nuclear arsenal and won’t consider any substantial sanctions relief until it does so. Administration officials dub this demand the “big bang” approach to disarmament. But there is no middle ground between “phased” and “synchronized” on the one hand, and the “big bang” on the other.


North Korea is not asking for anything it hasn't asked for before, and isn't agreeing to anything it hasn't agreed to before.  The status quo is ante, frozen, locked in place since the first day of the armistice which suspended, but didn't end, the Korean war.  Trump's brilliant idea, attributed to John Bolton, which is not reassuring at all, is to leave the table if he doesn't get his demands met.  Kim wins that, too, and the status of the United States is seriously diminished.  Trump doesn't understand that, either.

That's the problem; and it goes well beyond "collusion" and Russian interference in U.S. elections and who is indicted and who isn't.

If the summit fails, Trump will likely be blamed for its failure. And if Trump reacts to the failure by reigniting his “fire and fury” rhetoric, with threats of actual fusillades to follow, our Asian allies—whose leaders welcome a relaxation of tensions with North Korea but also rely on security guarantees from the United States—will likely peel away from Washington, fearing Trump’s belligerence and distrusting his assurances. And that is precisely what Kim wants most.


And then the problem will not be whether or not Trump "perhaps...never learned history."  It will be simply that this dolt is the President.  And then the questions of whether we can keep our country, and the  70 years of the post World War II world the generations before us worked so hard to create, will be felt very keenly.  And the question will be, how we did this to ourselves, how we got here.  The "Big Questions" will focus on what's happening now.  Call it a "crisis of legitimacy," and locate it in the acceptance of Trump the serial liar, and perhaps you reach this conclusion:

It’s no mean feat to offer a convincing explanation for how Trump could get away with—or perhaps even profit from—his incessant lies. But the part of the paper that most haunts me goes beyond that. A “crisis of legitimacy,” Hahl and his co-authors point out, can take two forms: In a “representation crisis,” large segments of the population feel that the political establishment doesn’t govern on their behalf. Meanwhile, in a “power devaluation crisis,” a once dominant group resents the fact that politicians increasingly seem to pay attention to new, formerly less powerful groups.

The United States is currently suffering from both crises. Many minority groups understandably feel that the current government doesn’t have their best interests at heart. At the same time, many members of the shrinking ethnic majority have good reason to believe that their power will keep on dwindling. In other words, the legitimacy of the American political system is increasingly in doubt on both sides of the partisan divide.

For the foreseeable future, the terrain of American politics will remain ripe for lying demagogues of all stripes.

And look for a starting point, the place in time where we started turning away from the post-war consensus about how to live together after the first half-century of wars we could no longer afford to repeat.  I would pin it somewhere in the early '70's, about the time the post-war economy faltered and started producing winners and losers; and probably back to the anti-war movement, where the fractures of class in American society first really appeared.  College students were the ones who could afford to avoid Vietnam; the people who couldn't afford college, went to war.  And then the ones who protested the war and could afford to dabble in poverty as hippies, grew up and turned to yuppies, cashing in on those college diplomas.  It wasn't nearly that simple, of course, nor that straightforward; but sometime in the early '70's the economic fissures began to open, and the comforting certainties of the post-war American prosperity machine began to spray gears and pop springs, and economic uncertainty returned.  Pensions became "defined benefit plans" which no one could afford, retirement became 401K's and IRA's and Keogh plans; and a corporate job became something you could lose as easily as a college student who failed a semester lost his deferment just a few years before.

This "crisis of legitimacy" has deep, deep roots.  Even Anthony Bourdain understands that, and has a simple solution that apparently has occurred to no one with the ability to go find out:

You know, the contempt with which we speak of West Virginia in the political circles that I’m inclined to vote with I think is sort of disgraceful and counterproductive and unlovely. A little understanding and a little empathy—the ability to walk in someone else’s shoes for a few minutes—has got to be a good thing. I went to West Virginia with the intent of making a show that was respectful and sympathetic, and that was easy because people were genuinely deserving of that respect. And they’re not foolish—they don’t think Trump is going to bring back coal to where it was—their concerns were more immediate and practical, like the difference between dinner on the table tomorrow and no dinner.


If we can't help those people meet that difference, between dinner and no dinner, even though they are white conservatives who think the 2nd Amendment means you'll have to pry their guns from their cold, dead fingers, then what legitimacy do we have, really?  And is our politics really going to be about rejoicing when those 100 million Democrats who stayed home in 2016 show up in November of this year?  Will that restore the legitimacy our system has lost?  For whom?  What would make our system legitimate again?  Facing the real threat of Trump as Boob-in-Chief is an immediate problem; facing whether this is a government, a country, we can keep, and a world we can keep living in, is another.