It is the silly season

Apparently, being on the Texas Railroad Commission now puts you on par with the Secretary for Homeland Security: 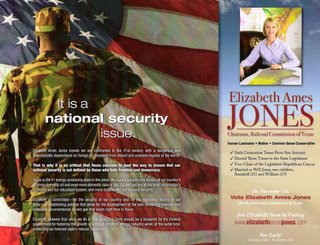 This is an 8X10 "postcard" I got today. Been getting a lot of those this week. The reverse says, rather sensibly: "6 out of every 10 gallons in your vehicle is made from oil that is imported. Our dependence on foreign oil is not an economic issue..."

No, apparently it's an issue worth going to war over. "No blood for oil"? Not in this election, apparently. The odd thing is, this candidate is running for the Texas Railroad Commission. Not governor, or Lt. Governor, or even head of the Texas Rangers (no, that's not an elected position!).

A little history: before the discovery of oil our oil under their sand, Texas had the largest known petroleum reserves on the planet. There were, literally, oil derricks in backyards in towns like Kilgore, Texas. Less than 100 years later, those fields are utterly exhausted. What oil we produce now is largely from offshore platforms. We went through it like a sailor at an open bar on shore leave. We went through it, in Gen. Patton's memorable phrase, like crap through a goose.

The Texas Railroad Commission regulated the drilling and sale of petroleum, and it controlled the market quite well in its day. OPEC is modeled on it. The TRRC is an elected body, like almost any governmant agency with any power in Texas, and it's still an important agency, as Texas is still an energy producing state. But it has nothing to do with security, protection of the oil refineries on the Gulf Coast, or even the Texas National Guard.

And it certainly has nothing whatsoever to do with national security. But the really scary part? "Elizabeth believes that what we do in The Lone Star State should be a blueprint for the Federal government for fostering the growth of a strong domestic energy industry while at the same time protecting our beloved state's natural resources."

Well, Enron is what our state has done to foster "a strong domestic energy industry," as well as Halliburton and George W. Bush. And Texas state parks are going to close, if something isn't done. And environmental concerns in Texas? Has she been to Houston lately?

I think the rest of the country, and the world, has had more of being treated like Texas than ever they deserved. But what do I know? I still don't see how the Railroad Commission is vital to supporting our troops.