"The spirit of the Lord is upon me,
because he has anointed me
to bring good news to the poor.
He has sent me to announce pardons for prisoners
and recovery of sight to the blind;
to set free the oppressed,
to proclaim the year of the Lord's amnesty.

After rolling up the scroll, he gave it back to the attendant, and sat down; and the attention of everyone in the synagogue was rivted on him.

Israel was under occupation when those words were said. They were under occupation again when Jesus read them in the synagogue. And all he did, and all Isaiah did, was proclaim the rule of the law of Moses, proclaim that Israel would again be sovereign and conduct its own affairs. Or course, Jesus' claim was for the kingdom of God, not the kingdom of David. Still, the oppression of Israel was by an outside force.

A record 7 million people — or one in every 32 American adults — were behind bars, on probation or on parole by the end of last year, according to the Justice Department. Of those, 2.2 million were in prison or jail, an increase of 2.7 percent over the previous year, according to a report released Wednesday.

Men still far outnumber women in prisons and jails, but the female population is growing faster. Over the past year, the female population in state or federal prison increased 2.6 percent while the number of male inmates rose 1.9 percent. By year's end, 7 percent of all inmates were women. The gender figures do not include inmates in local jails.

If an occupying force were levying this level of incarceration on the US, it would be a cause of the most violent turmoil, and who could disagree? One problem with being the sovereign in a democracy is that the people diffuse responsibility so greatly that there is no responsibility any more. We truly come to believe we do not jail our fellow citizens; they jail themselves. But when the number jailed rises to 13% 2.3% of the population, is it really possible to convince ourselves we have that many bad apples?

Apparently our ability to evade responsibility is bottomless. We prefer to rely on the "System" to take care of all our needs. "O machine, O machine!," the people in E.M. Forster's novella "The Machine Stops," fervently pray. But they are so dependent on the system that, when the machine stops, they don't know what to do. One of the thrusts of Christianity, the one we have been thrusting away again since Jesus sat down in that synagogue and made that announcement, is that we are responsible for our lives, and that no one else is the boss of us, when we accept the sovereignty of God. Israel, the gospels tell us, was waiting for a Messiah to come like David and restore the nation, to come down as in the days of old, and make the mountains quake at God's presence, to make God's name known to God's adversaries, that they might tremble in God's presence. We're still waiting for that. We've merely postponed the time of the arrival, and even planned for a millenia before it, or after it, or maybe no millenia at all, but still quite convinced that God will finally, finally, make every valley level and every mountain a plain, so the world will see and confess the glory of God. And in the meantime, we don't have quite so much responsibility, and if we are the sovereign, why, we are only responsible for keeping law and order and middle class values alive against those who would take these things from us. We suspect up to 13% 2.3% of our fellow citizens, at last count. We are quite sure that when the machine finally stops, the Eternal Repairman will return to set all things right. We haven't abandoned the belief in the Messiah Christians criticize Israel for having; we've simply split the difference, and put off the adventus to a date to be determined. Preferably even one to be agreed upon.

Arise, shine, Jerusalem, for your light has come;
and over you the glory of the Lord has dawned.
Though darkness covers the earth and dark night the nations,
on you the Lord shines and over you his glory will appear;
nations will journey towards your light and kings to your radiance.

Raise your eyes and look around:
they are all assembling, flocking back to you;
your sons are coming from afar,
your daughters are walking beside them.

You will see it, and be radiant with joy,
and your heart will thrill with gladness;
sea-borne riches will be lavished on you
and the wealth of nations will be yours.

Camels in droves will cover the land,
young camels from Midian and Ephah,
all coming from Sheba
laden with gold and frankincense,
heralds of the Lord's praise.--Isaiah 60:1-6, REB

Matthew drew his wise men and their gifts from Isaiah's prophecy. It is part and parcel of the adventus that is again coming. And what does this new dawn herald? Good news to the humble, liberty to the captives, release to those in prison. Isaiah 61, in other words; the words read by Jesus, in Luke's gospel. It is all of a piece, if you put the pieces together. And yet we still prefer the assurances of our own power. And one in 7 of our fellow citizens, has known prison, or is on parole. The people who dwell in darkness have yet to see the promised light.

Is there a religious answer, then? Yes. No. We are not a Christian nation, and should not pretend to be. "Christian nation," in fact, is an oxymoron; let us abandon the concept, and with it the phrase. But yes, something can be done, if we accept the alternative vision of the world that is the kerygma of the kingdom of God. 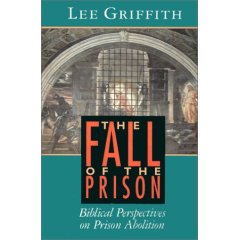 I've had this book on my shelves for a long time, and never gotten around to reading it. Perhaps its time that I did. The back cover assures me, from people like Walter Wink and Will Campbell, that this is the real deal. It seems like an appropriate meditation for Advent. I haven't read the book, as I say; but here is how it ends, which is a good place for a beginning, too:

As we consider the alternatives for addressing crime and for responding humanly to both offenders and the victims of crime, we are reminded that, biblically understood, "criminal justice" is not a separate "issue" to be addressed by some political forum. The Bible does not instruct us to segregate our lives into areas defined by the issue of crime and the issue of poverty and the issue of morality and the issue of war and peace. Biblically understood, lawlessness and the prison are both manifestations not of a political issue but of a spiritual crisis that affects us all. It is a crisis wherein we persist in choosing death even though God has chosen life on our behalf. When we focus on this spiritual crisis, we see that violence and disrespect for life are the same no matter what the manifestation. And so we cannot talk about robbery on the streets of our cities without also talking about the robbery that takes place when we eat from full tables while one-third of the world remains malnourished. We cannot talk about violence on the streets of our cities without seeing its direct link to the fact that, as a nation, we are armed
to the teeth with enough nuclear weapons to obliterate our planet. If we talk about immorality and prostitution, we must do so with an eye to the numerous ways in which we prostitute ourselves to the gods of success, respectability, and material possessions. And so efforts to address the problem of crime nonviolently will necessarily involve us in efforts to feed the hungry, resist militarism, and climb on down the social ladder.

Will any of these alternatives work? We don't know. We have no guarantees. We only have the biblical story. But what a story it is, and what things we are told! And try as we might, we can't change the story. Try as we might to pin the labels on other people - criminal, thief, murderer, monster - that won't change the story that we all have one Creator and we are all sisters and brothers. We can spend the rest of our lives inventing new handcuffs and building new prisons, but that won't change the fact that Jesus proclaims liberty for the captives and the prisons have fallen. We can buy guns and stockpile nuclear weapons until the earth sinks under their weight, but nothing we can do will ever undo the resurrection and the fact that life is chosen for us. And we can call the police as often as we wish, but let us remember the story: Jesus comes as a thief in the night.--Lee Griffith, The Fall of the Prison: Biblical Perspectives on Prison Abolition (Grand Rapids, Michigan: Wm. B. Eerdmans 1993), pp. 227-28.

See? An Advent lesson wherever you look.

Correction: I originally read those numbers (in haste) as 1 in 7 incarcerated or on parole, not 1 in 32. Which still brings up the other issue of our Christian witness: whatever you did to the least of these, you did to me. DAS points out the Xian emphasis on "original sin" is an easy justification for even 2% of the population behind bars or under police supervision. Oddly, Jesus never preached anything remotely like that. For him, creation was good, and everyone he met worthy of his attention and his blessing, without first confession or even repentance. We are the ones who charge for our services; not God.
Posted by Rmj at 10:57 AM