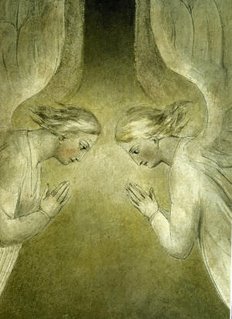 It's the birthday of William Blake, born in London (1757). He wrote Songs of Innocence and Experience (1794) and The Marriage of Heaven and Hell (1790). He lived in poverty, ignorant of the rest of the literary world of London, scraping out a living from his trade as an engraver, and writing and drawing under inspiration he considered divine. He said about his long poem Milton, "I have written this poem from immediate dictation, twelve or sometimes twenty lines at a time, without pre-meditation and even against my will." He lived in a world of dreams and visions. One day he and his wife were sitting naked in their garden, reciting to each other passages from Paradise Lost. Blake was not embarrassed when a visitor came by. He said, "Come in! It's only Adam and Eve, you know."

You don't believe - I won't attempt to make ye:
You are asleep - I won't attempt to wake ye.
Sleep on! sleep on! while in your pleasant dreams
Of Reason you may drink of Life's clear streams.
Reason and Newton, they are quite two things;
For so the swallow and the sparrow sings.
Reason says `Miracle': Newton says `Doubt.'
Aye! that's the way to make all Nature out.
`Doubt, doubt, and don't believe without experiment':
That is the very thing that Jesus meant,
When He said `Only believe! believe and try!
Try, try, and never mind the reason why!' 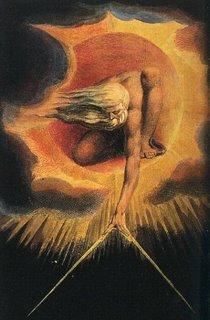