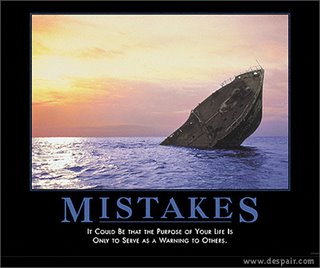 "It comes far too close to having the U.S. threaten to take its ball and go home if the Iraqi children do not play the game our way," Anthony Cordesmann, a military analyst at the Center for Strategic and International Studies, said in an e-mailed analysis, referring to possible withdrawal of support.

Whether we leave or stay, the moral responsibility remains ours, and ours alone. We took up the "cause" of the Iraqi people when we decided to invade, to make the world a "better place" without Saddam Hussein in power, or threatening us with WMD, or with a new democracy in the Middle East, or whatever the excuses were. That doesn't matter now. We broke it; we bought it.

“They came up with a political thought but then got to tinkering with tactical ideas that in my view don’t make any sense,” General McCaffrey said. “This is a recipe for national humiliation.”

Humiliation is only a concern when you are the only one involved. We are well past the question of national humiliation, now. This is no longer a matter of how the US appears; it is a question of who we are responsible for, and how we discharge that responsibility. Because this is where we are right now:

A last issue is that given the deterioration of security in Iraq, it may take the combined efforts of American combat units and Iraqi security forces to try to arrest the spiraling violence. In the end, that task may not be achievable. But since it is American forces that have often worked to curb the sectarian killings — and since many of the Iraqi forces have been infiltrated by sectarian militias — there is reason to believe that the civil strife will grow if the American combat forces soon begin to leave.

Of course, there is no reason to believe the violence will diminish so long as we stay. Should we stay, or should we go? That appears to be the only "consensus" James Baker envisions arising from his study group's report. As the Times notes:

The study contains all the ingredients of a Washington compromise. What is less apparent is a detailed and convincing military strategy that is likely to work in Iraq.

Matt Taibbi points out this is a classic Washington scenario, and nothing is going to change anytime soon:

We may soon have to face this fact: with the midterm elections over, and George Bush already a lame duck, the Iraq war is no longer an urgent problem to anyone on the Hill who matters. The Democrats are in no hurry to end things because it will benefit them if Iraq is still a mess in '08; just as they did this fall, they'll bitch about the war without explicitly promising to end it at any particular time. George Bush has already run his last campaign and he's not about to voluntarily fuck up his legacy with a premature surrender or a humiliating concession to Syria or Iran. At least publicly, John McCain is going to head into '08 siding with those in the military who believe the problem is a lack of troops.

For the Iraq disaster to end, someone among these actors is going to have to make a difficult decision -- admit defeat, invite a bloody civil war, lose face before a pair of rogue terror-supporting states -- and it's obvious that none of them is ever going to do that, not until there's absolutely no choice. The Baker-Hamilton report is being praised for its cautious, sensible, bipartisan approach to the Iraq problem (Time magazine even called it "genius") but actually all it is is a tacit recognition of this pass-the-buck dynamic in Washington. Because there is currently no way to even think about ending the actual problem without someone in Washington having to eat a very big bucket of shit, both sides have agreed, in the spirit of so-called bipartisan cooperation, to avoid thinking about ending the problem in the immediate future. Instead, the official policy in the meantime, bet on it, will end up being some version of a three-pronged strategy that involves 1) staying the course or even increasing the amount of troops temporarily 2) seeing what happens in '08, and 3) revisiting the issue after we see who wins the White House two years from now.

Perhaps part of the problem is continuing to see this as a military issue, something that can be solved simply by greater force of arms. The Iraqis certainly present a more nuanced view of their situation, but no one is asking them. Could it be the solution is a moral one, and that requires talking to people? Not just talking to them, but listening to people? Could it be that is what we fear most: that we will have to treat the Iraqis as people, and respect them, and take up the challenges of our ideas of American history and morality, and actually put them to work? Could it be we are simply afraid of getting our fingernails dirty, or of the "national humiliation" that might come from the slow, complicated, messy work of letting people live the lives they want to, rather than the quick, brutal, and ineffective effort of imposing our dreams and visions, our will, on others through blunt and savage power?

Could it be the final irony of American history that our sense of moral superiority has caught up with us, and we finally have to decide if we want to do the hard work of being moral, or mount the brittle bulwarks and defend our "superiority"?

Because whatever we do as a nation now, in Iraq, the moral question remains. We are going to be forced to face an issue of responsibility, again. Which is what morality is supposed to guide us in accepting. Whether we will follow that guidance, or not, is now the national question everyone is avoiding.