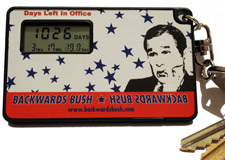 So, I got one of these from a friend the other day. And then what shows up in the news but this:

"The election was not a happy event around here, obviously," Bolten said, sitting on a couch in his spacious corner office where light streams in through tall windows. "Everybody's disappointed, but I haven't seen a single discouraged person."

To keep the staff focused, Bolten handed out about a dozen countdown clocks that show the number of days, hours, minutes and seconds left in Bush's presidency. The clock read 1,000 days in April when Bolten started his job, saying it was time for the White House to "get our mojo back."

Six months later, the pendulum has swung the Democrats' way, Iraq is chaotic and the president's job approval rating is stuck in the 30s. There now are fewer than 800 days left -- not a long time to push the Bush agenda, especially when the president's power is slipping away.