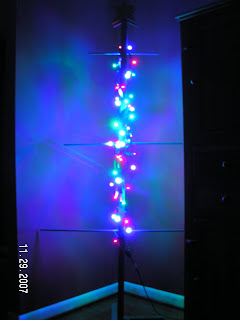 I am watching with bemusement as religion goes from being the solution in American politics, to being the problem. Thers picked up on yet one more example, which is particularly bad as it wants to equate the civil rights movement (Dr. Martin Luther King was a Christian minister, something a lot of people tend to forget for one reason or another) with George W. Bush preening his public piety for the fundamentalist/evangelical vote. Now that we have a real, live ordained minister (who does not have a "theology degree," nor any better understanding of Islam than the average American), and a Mormon who feels compelled to make a speech about religion in American public life, suddenly many conservatives are upset about the influence of religion in American politics.

It would be laughable if it weren't so predictable.

You can nitpick the claims being made now, such as the one Thers highlights:

It's not just the Republicans, either. The Democrats have used churches for decades as backdrops for political speeches, especially in the African-American community. Churches themselves have actively pursued politics for both parties, raising money and issuing endorsements.

All too easy to remind such commenters of the Tax Code, for example; maybe thrown in a mention of All Saint's Episcopal Church. But the real issue here is the question of consistency; and also, the even broader question of public piety.

Piety as most people understand it or think of it being practiced, is linked to the Pietistic movement of the 17th century. Pietism arose in the German Protestant churches in the 17th century as a reaction to the rather arid climate of the Reformation; its aim was to restore a measure of devotion to religious observance, and, not coincidentally, to involve the individual more in spiritual practices. By the 19th century Pietism was bolstered by the emphasis on the individual that arose under Romanticism. This put even more emphasis on the individual experience, rather than on the experience and knowledge of the community. Allow me a diversion for a moment:

The Hebrew prophets had very individual experiences of God. Isaiah had a vision of standing in the throne room of God. Jeremiah claimed God has chosen him from the womb, and Jeremiah often complained bitterly about what God told him to say. Ezekiel recounted visions and experiences we would call hallucinatory and attribute either to LSD or (probably) to schizophrenia today. Hosea felt compelled to marry a prostitute as a public act of prophecy, and to name his children as symbols of Israel's apostasy (and you thought "Moon Unit" and "Apple" were burdensome names!). Amos came in from the fringes of Israeli society (a herdsman and dresser of sycamore trees) to condemn the king in Jerusalem on behalf of God. What made them prophets was not that they said they were, but that the community said they were. Their words were tested by the community, found ultimately to be truthful, to be a revelation of God, and were incorporated into the canon of the "word of God."

Pietism made no attempt to reverse that process, but the abuse of Pietism did. Protestantism, from its beginnings under Luther, Calvin, and Zwingli, inspired not unity but fraction. Under the influence of Pietism and Romanticism in the 19th century, especially in America, that fractioning took off, with figures like Aimee Semple McPherson claiming prophetic powers and gathering followers who were, usually, disappointed in the end. Consider the individualism of Whitman, Thoreau, and Emerson, and you can easily see where the "Great Awakening" of the Puritan churches of New England in the 17th century, became the "Second Great Awakening" of the American churches in the 19th century, with a healthy push from Romanticism and, not coincidentally, industrialization.

Few churches arose from leaders like McPherson, but while there were alive they were "successful" and prospered, or ended their days in outrageous scandal. Oddly, the scandals seldom dimmed the public perception of their piety, only their ability to command a small fortune from their "faithful." The American "mega-church" is not so new and original as many might suppose. And it simply continues the emphasis on the individual experience, rather than the experience acknowledged by the community. Which, in the public sphere, is ultimately the only experience that matters.

What we are seeing is a return to that understanding, but the comparison to the use of church in Democratic politics (although the Democrats are hardly without blemish in the abuse of church in the pursuit of power) couldn't be more misguided. The African American church has always been important in Democratic Party politics because African Americans have been important to the Democratic party. But the place of the church in African American politics has been in equal measure a central institution of that community, and a place where justice is preached and pursued. Dr. King never wrapped himself in the comfortable public piety of George W. Bush. Instead, he proclaimed the hard truth and long, difficult road of justice, well within the tradition of the Hebrew prophets (anyone who doesn't think the prophets were concerned almost solely with justice, and didn't suffer for their preaching, has never read the prophetic books). Politicians, of course, don't get far making such proclamations; which means they shouldn't wrap themselves in the mantle of religiosity trying to win votes so that they can gain power. Power, after all, is all that politics is about. But in a democracy, power flows from the consensus of the community (fitfully, to be sure, but eventually). The problem with religion in American politics is the problem of that consensus.

Atrios is right: the current strain of public piety is bad for religion. But the reasons it is bad are complex and conflicting. What's interesting now is to watch the return of "secularism." But it shouldn't be confused with the "secular humanism" denounced by fundamentalists, nor with the anti-religious secularism espoused by Dawkins, Dennet, and Hitchens. What's going on now is merely the inevitable change of partners, as power realizes conservative American Christianity has pretty much been used up as its current agent of influence, and now will be discarded with no more regard than we could give to a used kleenex. It doesn't mean it's an opportune time to reclaim the public sphere for a more "liberal" religious spirit (that's a separate question, with separate problems). It does mean the music has stopped, and everyone in politics is looking for new partners.

Time to beware. Time to be awake.