"If there when Grace dances, I should dance." 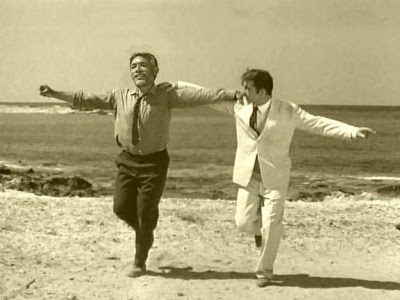 Starting with Auden to explain my purpose in quoting Derrida earlier. My interest was in the word "performative" that he used. Derrida marks this off, making it clear his reference is to Speech Act Theory and its emphasis on the performative nature of some kinds of speech, But my interest was in the connection to the greatest speech act of history, according to Genesis: the Creation.

"Performative" is the voice of command in grammar. It is the second person, the implied "you" that directs another to act, to respond, to do something. The performative is in the speech itself: the command itself is meant to be the act, although of course the command requires a respondent. And this is where the speech/act of Genesis becomes absolutely incomprehensible.

1 In the beginning God created the heavens and the earth.

2 Now the earth was [a] formless and empty, darkness was over the surface of the deep, and the Spirit of God was hovering over the waters.

6 And God said, "Let there be an expanse between the waters to separate water from water." 7 So God made the expanse and separated the water under the expanse from the water above it. And it was so. 8 God called the expanse "sky." And there was evening, and there was morning—the second day.

9 And God said, "Let the water under the sky be gathered to one place, and let dry ground appear." And it was so. 10 God called the dry ground "land," and the gathered waters he called "seas." And God saw that it was good.

20 And God said, "Let the water teem with living creatures, and let birds fly above the earth across the expanse of the sky." 21 So God created the great creatures of the sea and every living and moving thing with which the water teems, according to their kinds, and every winged bird according to its kind. And God saw that it was good. 22 God blessed them and said, "Be fruitful and increase in number and fill the water in the seas, and let the birds increase on the earth." 23 And there was evening, and there was morning—the fifth day.

26 Then God said, "Let us make man in our image, in our likeness, and let them rule over the fish of the sea and the birds of the air, over the livestock, over all the earth, [b] and over all the creatures that move along the ground."

27 So God created man in his own image,
in the image of God he created him;
male and female he created them.

28 God blessed them and said to them, "Be fruitful and increase in number; fill the earth and subdue it. Rule over the fish of the sea and the birds of the air and over every living creature that moves on the ground."

29 Then God said, "I give you every seed-bearing plant on the face of the whole earth and every tree that has fruit with seed in it. They will be yours for food. 30 And to all the beasts of the earth and all the birds of the air and all the creatures that move on the ground—everything that has the breath of life in it—I give every green plant for food." And it was so.

31 God saw all that he had made, and it was very good. And there was evening, and there was morning—the sixth day.

Very simple, very straightforward, very incomprehensible. God speaks, creation happens. There is a presumed response to the command, but by what? God says "Let there be light," and light there is. Language has a problem here, and it isn't the problem of mythological concepts being taken literally. It is the problem of trying to describe the ineffable, of trying to explain what is without parallel in human experience. This is creation ex nihilo, but not really ex nihilo, either. This is creation out of, but whereas our language insists creation be out of "something," this creation story simply says Creation is out of. And it is out of the speech/act, the "word" of God.

Which brings us back around to Derrida:

A rational system of analysis brings the paradox to light: the performative event of the Creation cannot belong to the Creation that is founds, inaugurates, or justifies. The first chapter of Genesis, of course, does all three. It founds, inaugurates, and justifies the Creation: "God saw all that he had made, and it was very good." God is wholly other to Creation, but it cannot be otherwise. God cannot be the foundation of Creation (the "Ground of Being," in Tillich's formulation) if God is creator of Creation. And just so, no creation by humans, be it the blogosphere or a political party or a religion, can be anything but "other" to its creator(s). So we are back to the issue of this post: if we critique a system and by our critique seek either to reform it, or to create an alternative (two conditions that often appear alike: ask Martin Luther), we cannot avoid being other to what we have created. But if we engage in this act of creation in order to exert power, or to establish a structure over which we can exert power, do we not always create yet another structure which walks away from us, and pursues its own ends?

"D'you know," he said, "how God made man? D'you know the first words this animal, man, addressed to God?"
"No, how should I know. I wasn't there."
"I was!," cried Zorba, his eyes sparkling.
"Well, tell me."
Half in escstasy, half in mockery, he began inventing the fabulous story of the creation of man.
"Well, listen boss! One morning God woke up feeling down in the dumps. 'What a devil of a God I am! I haven't even any men to burn incense to me and swear by my name to pass the time away! I've had enough of living like an old screech-owl! Ftt!' He spat on his hands, pulled up his sleeves, put on his glasses, took a piece of earth, spat on it, made mud of it, kneaded it well and made it into a little man which he stuck in the sun.
"Seven days later he pulled it out of the sun. It was baked. God looked at it and began to split his sides with laughter.
"'Devil take me,' he said. 'It's a pig standing on its hind legs! That's not what I wanted at all! There's no mistake I've made a mess of things!'"
"So he picks him up by the scruff of his neck and kicks his backside.
"'Go on, clear off! All you've got to do now is to make other little pig's; the earth's yours! Now, jump to it. Left, right, left, right...Quick march!...'
"But, you see, it wasn't a pig at all! It was wearing a felt hat,a jacket thrown carelessly over its shoulders, well-creased trousers, and Turkish slippers with red tassels. And in its belt--it must have been the devil who'd given it that--was a pointed dagger with the words 'I'll get you!' engraved on it.
"It was man! God held out his hand for the other to kiss, but man twirled up his moustache and said:
"'Come on, old 'un, out of the way! Let me pass!'"

You'll notice Kazantzakis goes for the second creation story, in Genesis 2. Much easier to grasp creation through manipulation of objects, than creation as speech/act theory. But I like the way God continues to speak in declaratives and commands. And the lesson is plain: what you create remains other to you, otherwise it is not a creation. So the gathering of those with power (to travel, to access the internet, to contemplate other subjects than their own immediate daily survival, to consider other than the quotidian necessities) is a gathering of those with a creative ability, but what they create, in an effort to attain control, is not theirs to control. A gathering of the ptochoi, the destitute, the powerless, the despised, the broken, the forgotten, the invisible: what would that look like?

And what would they create? Jesus called it the basiliea tou theou. It's what got him in so much trouble with Rome. It's what gets him in so much trouble today. Because there must always be a desert within the desert, otherwise: "there would be neither act of faith, nor promise, nor future, nor expectancy without expectation of death and of the other, nor relation to the singularity of the other."