Blest Be the Ties that Bind 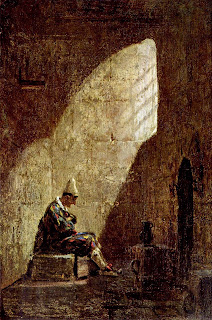 To spend a week in the fourth largest city in the country after a major hurricane has just walked all over it (it stomped all over Galveston Island and Bolivar Peninsula; whatever else Ike did, nobody got it worse than those poor folk; and they are mostly poor folk. There is no Riviera or Miami Beach or Carmel on the Texas Gulf.) is like waking up as Gulliver on the beach in Lilliput, only what has you tied down are not a strange new race of beings, but the strange new race you realize you have become. In an instant of weather (as one tree company employee from Wisconsin (God bless Wisconsin!) said knowingly as they came to clear the 80 pine from the power lines: "Weather, huh?") all those lines that tied you to the 20th century have now tied you down to the 19th, and you have a taste of what life was like for people who grew up in this area when it was farmland, some of whom still live here now.

Work, for the night is coming, wherein no man may work

You are like Gulliver, tied down by a thousand tiny strands, but the irony is not in the image but in the reality. Where those strands once liberated you, once set you above and apart from the rest of human history, once elevated you to places you took for granted as your birthright, as your due, as what made life livable (and mere loss of power can, in the U.S., render an otherwise sound house "unlivable." What, then, do we make of stone and concrete huts, of yurts, of the shanties so much of the world lives in?), now they tie you to comforts you can only wish for. The lines mock your memory, whisper of a promise in the future when life will be "normal" again, when you will turn on lights and fans and televisions without a second thought for how it happens, for what makes it possible.

But not today; today you lie tied down to the beach for another 24 hours; today you wonder where the magic went, and when it will come back. O machine! O machine!

The wires! The wires! Old Rocky Face, look forth!

One thing you forget about night: it is dark! There is a reason people used to work from sunup to sundown: when the sun goes down, there's nothing else to do but sleep. Candles don't dispel the dark, they mock the sunlight. You also forget that houses used to be designed to circulate air; but since the invention of air conditioning, that is actually an undesirable feature of housing design. So much better to let the technology (read: energy from electricity) do that for you! So much better, that is, until it doesn't. And then you step outside every morning only to realize that while the air temperature outside has actually dropped to a comfortable coolness for the Texas Gulf Coast (which would be considered stiflingly hot anywhere further north of the equator), inside your four walls the air is still as muggy and grim as the sub-tropic torpor it was when you went to bed. And the only fan you have (thanks to the generosity of a neighbor with a generator) simply recirculates what's trapped indoors. So night means sleep and another fervent prayer to the High Priests of the God of Electric Power, and day begins with once more cursing them for failing to respond to your petitions.