Selling Tickets for a Prayer Wheel 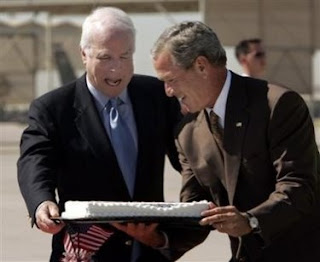 Alright, this is starting to creep me out.

I'm an ordained Christian minister, and I'm all for prayers and the "power" of prayer. But every speaker (it seemed; I don't think Kucinich did it, and I missed Gore's speech) at the Democratic National Convention felt compelled to close their speech with not only the now obligatory (thanks for nothing, Ronald Reagan!) "God bless America", but with every possible variation on "God bless you!"

I started wondering if the applause sounded like sneezing for some reason.

It was such a blatant pander to "believers" and "Christians" that it began to bother me, if only because it seemed less sincere and meaningful than simply a dog whistle, a marker, an identifier like a semi-secret handshake or a club tie. It's my problem with religion in the public sphere altogether: it assumes everyone shares your views and if they don't, well, it still sounds polite.

As if to fall into the hands of the living God was to be invited to the ultimate tea party. Feh.

And then I come across this, regarding McCains' suspension of much of the Republican National Convention (pardon my cynicism, but isn't it convenient that the suspension of activities on Monday knocked out speeches by both Bush and Cheney, neither of whom exactly have high favorability ratings just now. McCain is trying to undo his association with Bush, and make us forget when that picture above was taken.):

If you've read this far and still feel ambivalent about thinking about the politics of an event in which many people are already being displaced and suffering, then allow me to make a practical suggestion for putting politics here to good use here. Both candidates have boasted about their talents for bipartisanship. Both have also paid for ad time all over the country for advertisements (in some cases, attack ads) that are scheduled to air over the next few days.

So here's my idea: McCain and Obama should create a joint ad calling for donations and prayers to those affected by Gustav, and run those in place of the ads already scheduled. After all, attack ads—and attack ads in response to attack ads—make it onto the air in matter of hours. So there's no doubt the McCain and Obama campaigns could do this if they wanted to. If you think they should, call them: Obama's at (866) 675-2008, McCain's at (703) 418-2008. No one is practicing politics right now, so they should be able to respond to your call.

When did we start expecting our public officials to become Ministers-in-Chief? Why should they, rather than any national religious leaders (Rick Warren is too busy in sales, or something? No one in any of the mainline Protestant denominations can get the attention of the MSM?), call us to prayer? Not to mention what kind of prayers should be offered. Should their campaigns hand out prayer wheels? Call for prayers from shamans, priests, rabbis, imams, pastors, preachers? Should the prayers be responsive? Personal? Pastoral? From the Psalms? Should they also call for no prayers at all for the atheists one of them will, one day, represent?

I'm all for religion in the public sphere. The idea that religion is personal and private and so should be kept behind closed doors like the crazy uncle or the alcholic brother-in-law, is abhorrent to me. But this is rolling over into the other extreme, and it's becoming accepted as the new political norm. Can we please stop now, before religious expression (like prayers, central to so many religions around the world) become as debased a coin as all other forms of political speech in this increasingly cynical, increasingly ironic (in the Kierkegaardian sense), increasingly sad, sad country?