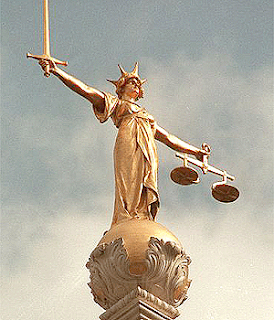 As the Bush Administration winds down, there is conviction in the air, based on nothing more than conjecture, that Bush will pardon all those who committed crimes like torture and kidnapping (a/k/a "extraordinary rendition") before he leaves office, an unprecedented "blanket pardon."

...raise serious constitutional and criminal questions, though there is some precedent in the Kennedy and Carter administrations. A traditional pardon is a public document naming individuals who are pardoned for specific crimes. One possibility being discussed is the use of a blanket pardon that would not individually name people but cover anyone associated with the unlawful programs. It would be a terrible precedent, if upheld. A president could pardon the world at the end of an Administration — gutting any accountability for criminal acts.

I think he's right, which is why I don't think such a pardon would get very far in the courts (where it would have to be upheld on a case by case basis, as individuals stepped forward to claim its protection. This, of course, is the primary problem: how do we determine the pardon was meant to cover the person in the dock? Or do we just, as Turley said to Rachel, allow the President to pardon the world?) The precedent, as I mention below, is for persons convicted of crimes, not for persons unknown who may or may not be guilty of unspecified criminal offenses. The presidential pardon is not a "Get out of Jail Free" card for any activity any unnamed person may have committed. As I have pointed out before, a presidential pardon is a public, not a private, act. To be effective, the person pardoned must accept the gift, which in this case means they must first accept their guilt. Pardons for persons unnamed for crimes not admitted are a nullity. True, George H.W. pardoned the "Iran-Contra" conspirators, but they were already charged with crimes, and the problem of accepting their guilt in exchange for a dismissed prosecution was a small one. Jimmy Carter pardoned the "draft dodgers," but again it was not a blanket pardon to anyone who ever tried to avoid the Vietnam draft or who was hiding out in Canada unknown to the world. The pardon was only for "civilians convicted of '[violating] the Military Selective Service Act by draft-evasion acts or omissions committed between August 4, 1964 and March 28, 1973'". Indeed, the history of pardons compiled by the State Department for a press release (not an ideal source, I admit) indicates that all Presidential pardons have been for convictions or to end prosecutions (the example of GHW Bush). If there are Presidential pardons issued to persons unknown for crimes unspecified, I don't know of them.

The pardons Bush is supposed to issue in order to save his own hide would have to be made to persons unknown for crimes unacknowledged as criminal. Bush has relied on questionable legal opinions to justify his most egregious policies: to issue a pardon would be to admit all of those opinions were wrong, all of those policies illegal. He would also have to issue a pardon to unnamed persons, those who conducted the torture, the kidnapping, etc., or he would have to identify them by name and by alleged crime. Those persons would then have to accept that their actions were indeed criminal, rather than legal, and publicly accept the pardons. Given the present situation, where all such persons are unknown to the public, and no prosecutions for any such crimes are pending, who would seek or accept such a pardon?

And why would Bush issue them?

A Presidential self-pardon is likewise highly unlikely, first because it would require Bush acknowledge he needs such a pardon (i.e., he has committed one or more crimes) and secondly, because it is of very dubious legality. My personal opinion is that, as a practical matter, the courts would simply decline to recognize its validity. Of course, that validity would only be tested if a criminal prosecution were brought against a former President for actions taken while he was in office, and I think snow in Houston in July is more likely than that.