What's so funny about peace, love and understanding? 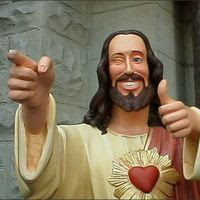 Listening to NPR this morning, the arguments for Proposition 8 in California were presented by the pastor of a "mega-church." He asserted that the Bible is a book of rules, the source of laws, and it tells Christians (at least) that marriage is between a man and a woman. And it left me wondering about the conversation between Jesus and the Pharisees. When they rebuke the disciples for picking food out of the fields on the Sabbath, Jesus pins them down with the question they can't answer: "Was humankind made for the Sabbath, or the Sabbath for humankind?"

It's a particularly telling retort, because the Sabbath predates the law, according to Genesis. The directive in Mosaic law to remember the sabbath and keep it holy traces back to the first chapter of Genesis, the first book of Moses. There the Sabbath is when God rests and enjoys the fruits of God's labors, the fruits of Creation itself. Humankind, says the first book of Moses, was not made for the Sabbath; the Sabbath was made for humankind, so humanity could, like God, in the image of God, enjoy all this goodness that God had created.

If it is the latter, of course, then same-sex marriage can, and even arguably should, be banned. Humankind is made for the law, and the letter of the law is inviolable. Although I'm left wondering how many members of that pastor's church eat cheeseburgers or drink milkshakes with their hamburgers, let's not be Pecksniffian about this issue. The question is not which rules we choose to follow, the question is: why do we choose to follow rules at all? Were the rules made for us, or were we made for the rules?

It's not as clear a distinction as it seems, because one the one hand, if the rules were made for us, there are no rules, since we can change them to suit us willy-nilly. I mean, if the rules are for our benefit and we stop seeing a benefit from them, away with them, n'est pas? Isn't that the central argument of the Declaration of Independence, that when the rules established to guarantee life, liberty and the pursuit of happiness get in the way of those things, the rules must fall away? Yes, yes, Jefferson applies that argument to "government," not "rules," but what is government except the provider and enforcer of the rules? Without rules, government has no purpose and no ability to function, so it's a fair question: isn't this "rules were made for us, not us for the rules" argument, a peculiarly American one, and one meant to guarantee liberty for all?

What, then, of the prophets, of even the letter of Paul to the Galatians? For Christians, at least, that's the question: if the rules were made for us, then of what use are rules, and yet, without rules, how do we obey God? How do we even do justice and love mercy? How do we define ourselves as Christian, if we define "Christian" as being free to follow no rules at all? I can already hear Paul readying to call us all "stupid Galatians!"

But if humankind was made for the rules, what prison are we entombed in for all eternity? Even the harshest Pharisee was never so harsh, except in the caricatures presented in the gospels. It's worth noting that in that passage the Pharisees are traveling with Jesus. They are followers, not yet enemies; they are seeking to learn from the rabbi, they seem him as a fellow traveler on their path. It may be they even took a lesson from this teaching, rather than withdrew (as the gospels are wont to portray them doing closer to Passion Week) and plotted how to destroy a teacher of such heresies. If they took a lesson, as it is likely they did, they took a lesson of wisdom from a rabbi, not a new rule of order from a lawyer or a bureaucrat.

And the lesson of wisdom is this: look to the creation, and consider who and whose you are. What does the Lord require of you, but to do justice, love mercy, and walk humbly with your God? Is it justice to impose a narrow view of marriage on a society that may not share your religious convictions? Is it justice to decree that God does not allow certain legal arrangements, and you are the Lord Protector who will see to it that such arrangements are never legally allowed? Is it justice to condemn the disciples for picking the ears of wheat and eating them on the Sabbath? Was the Sabbath made for humankind, or humankind for the Sabbath?

If you say the latter, then humankind is the most damned of all Creation, and free will is a curse and the Sabbath a miserable burden. If you say the former, then you must ask why this tradition is honored, and how it should be honored. Is it because the observance of the Sabbath is a time to rest and enjoy creation, a one day a week vacation from the busy-ness of securing one's life, of gaining one's daily bread? Or is the Sabbath there because God wants another excuse to smite us? The same question applies to marriage: is it there to make us pleasing in the sight of a jealous and small-minded god? Or is it there to benefit us? Were we made for marriage, or was marriage made for us? And if it's the latter, then why isn't marriage made for us whoever, as adults, we are?