"Out upon 'Merry Christmas!' " 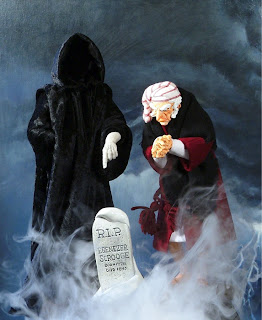 It all went wrong when we went to War on Christmas:

Notwithstanding the cardboard Santas who seem to have arrived in stores this year near Halloween, the holiday season starts in seven days with Thanksgiving. And so it will come to pass once again that many people will spend four weeks biting on tongues lest they say "Merry Christmas" and perchance, give offense. Christmas, the holiday that dare not speak its name.

This year we celebrate the desacralized "holidays" amid what is for many unprecedented economic ruin -- fortunes halved, jobs lost, homes foreclosed. People wonder, What happened? One man's theory: A nation whose people can't say "Merry Christmas" is a nation capable of ruining its own economy.

One had better explain that.

Yes, one better had.

The fault, you see, lies not in greedy Wall Street traders, or investors who had more and more cash to invest and went looking for what finally became NINA (No Income, No Asset) loans, but in...well, let Mr. Henninger tell you:

The path to 50% wealth reductions and the death of Wall Street was paved with good intentions, notably the notion that all should own a house, even if that required giving away the house to untutored borrowers with low-to-no-interest loans.

Yes, those borrowers never should have accepted the ridiculous loans the lenders made. It's their fault the lenders failed, and now it's their fault anyone who goes about with "Merry Christmas!" on his lips will be boiled in his own pudding and buried with a stake of holly through his heart!

The problem, of course, is people; people keep mucking up The Big Idea!:

Little or nothing that has occurred through this crisis discredits the system of free-market capitalism. Across several centuries of rising world incomes and social gains, the system has proved its worth. In this instance, the system has been badly used -- by mere people. Nonetheless, the dimensions of the fall and devastation that originated in subprime mortgages are breathtaking.

Damn those people! If it weren't for them, everything would have been perfect! And now they won't even let us say "Merry Christmas!" What? You fail to see the connection?

What really went missing through the subprime mortgage years were the three Rs: responsibility, restraint and remorse. They are the ballast that stabilizes two better-known Rs from the world of free markets: risk and reward.

Responsibility and restraint are moral sentiments. Remorse is a product of conscience. None of these grow on trees. Each must be learned, taught, passed down. And so we come back to the disappearance of "Merry Christmas."

Actually, it's the fault of William O. Douglas (let the reader be aware!):

It has been my view that the steady secularizing and insistent effort at dereligioning America has been dangerous. That danger flashed red in the fall into subprime personal behavior by borrowers and bankers, who after all are just people. Northerners and atheists who vilify Southern evangelicals are throwing out nurturers of useful virtue with the bathwater of obnoxious political opinions.

The point for a healthy society of commerce and politics is not that religion saves, but that it keeps most of the players inside the chalk lines. We are erasing the chalk lines.

Yes, the world was a better place before we started saying "Happy Holidays." Personally, I blame Bing Crosby.

So Christmas is not coming, despite what the stores and the calendar may tell you! It's ruined, I say, ruined! The holiday was never a "holy day" anyway, and it was only and always all about buying and getting and taking, and now we can't afford to do that, thanks to illiterate borrowers who took advantage of honest lenders who only wanted to make NINA loans so they could bundle them into securities that would be safe as houses, and now they can't even do that! O, the perfidy! O, the humanities!