D.C is a Southern City 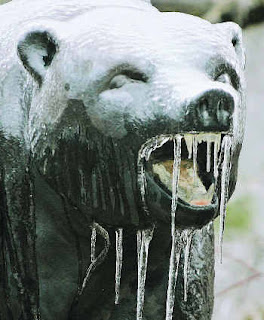 When I lived in Chicago (the Coldest Year Of My Life), my daughter was in the 1st grade. Students lined up outside to wait for the doors to open. They were only allowed inside early if the temperature was below -5F. Otherwise, they could wait.

I thought about that when I saw this:

"My children's school was canceled today, because of what? Some ice," Obama said, and all at the table started laughing.

"As my children pointed out, in Chicago school is never canceled," he continued. He said that in their old hometown, "you'd go outside for recess in weather like this. You wouldn't even stay indoors."

The President said he would have to bring "some flinty Chicago toughness" to Washington.

Asked if he was calling Washingtonians wimps, Obama responded: "I'm saying that when it comes to the weather, folks in Washington don't seem to be able to handle things."

I do wonder, however, how low he'll want to set the thermostat in the summer. People in Chicago seemed to think anything above 77 called for refrigeration. They never believed me when I spoke of getting into cars with plastic steering wheels in summer, and burning my hands for 20 minutes until the A/C or the open windows cooled the interior down.