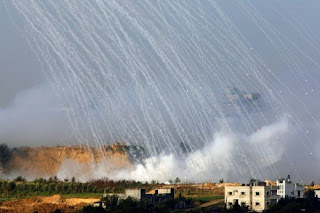 Aaron David Miller tells NPR this morning that the US has lately transformed it's "special" relationship with Israel into an "exclusive" one. Gee, wonder where he got that idea?

The Senate voiced strong support Thursday for Israel's battle against Hamas militants in Gaza, while urging a ceasefire that would prevent Hamas from launching any more rockets into Israel.

The chamber agreed on a voice vote to the non-binding resolution co-sponsored by Democratic and Republican party leaders in the chamber.

"When we pass this resolution, the United States Senate will strengthen our historic bond with the state of Israel, by reaffirming Israel's inalienable right to defend against attacks from Gaza, as well as our support for the Israeli-Palestinian peace process," Senate Majority Leader Harry Reid, a Nevada Democrat, said before the vote.

Noting that Israel was bent on halting Hamas rocket fire into its southern towns, Reid said: "I ask any of my colleagues to imagine that happening here in the United States. Rockets and mortars coming from Toronto in Canada, into Buffalo New York. How would we as a country react?"

Apparently by killing our foes at the rate of almost 60 to 1.

Co-sponsor and Senate Minority Leader Mitch McConnell, a Kentucky Republican said before the vote: "The Israelis ... are responding exactly the same way we would."

Yes, I'd like to think that we, too, would destroy a convoy of humanitarian aid.

Mr. JOHN GING (Director of Operations, UNRWA, Gaza): That's the whole point. They were fully informed, and they had given the green light for it to proceed through their liaison office in real time. And that's not just the first event. These incidents is happening(ph), occurring at an alarming and repetitive rate over the last period of time. And we have been receiving assurance and reassurance after assurance, again, that they would not reoccur. Today, tragically, a contractor of ours lost his life because we took, at good faith, the green light that was given, and moments later, he's dead.

And Gaza? Oh, what a paradise it seems!

NORRIS: You've described conditions in Gaza right now as hell on earth. What do you mean?

Mr. GING: Well, 750,000 people without water, (unintelligible) days and nights without sleep, incessant bombing, traumatized, nowhere safe, 670 dead, over 3,000 injured, a million people in Gaza already destitute and food aid dependent on hand outs and food from the U.N., not getting their food at the moment. The power plant has been closed down since 31st of December, no electricity for a million people. You know, the list goes on and on.

Haven't we seen this movie? Didn't we call it "Iraq"? Maybe that's why the Congress is so supportive of Israel, huh?

The Senate resolution encourages President George W. Bush "to work actively to support a durable, enforceable and sustainable ceasefire in Gaza as soon as possible that prevents Hamas from retaining or rebuilding the capability to launch rockets or mortars against Israel," Reid said.

IOW, dust off and nuke the whole thing from space. It's the only way to be sure. Certainly the only military way to keep Hamas from ever launching a rocket again. What? I'm serious.

It also expresses an "unwavering" commitment to Israel's welfare and recognizes its right to act in self defense to protect citizens against acts of terrorism, he said. "It allows for the long-term improvement of daily living conditions of the ordinary people of Gaza," he said.

So, I'm not sanguine about this report in the Guardian:

The incoming Obama administration is prepared to abandon George Bush's ­doctrine of isolating Hamas by establishing a channel to the Islamist organisation, sources close to the transition team say.

And Mr. Miller makes a re-appearance:

"Unless he is prepared to adopt a policy that is tougher, fairer and smarter than both of his predecessors you might as well hang a closed-for-the-season sign on any chance of America playing an effective role in defusing the current crisis or the broader crisis," [Aaron David Miller, a former state department adviser on the Middle East], said.

Obama has defined himself in part by his willingness to talk to America's enemies. But the president-elect would be wary of being seen to give legitimacy to Hamas as a consequence of the war in Gaza.

Bruce Hoffman, a ­counterterrorism expert at George­town University's school of foreign ­service, said it was unlikely that Obama would move to initiate contacts with Hamas unless the radical faction in Damascus was crippled by the conflict in Gaza. "This would really be dependent on Hamas's military wing having suffered a real, almost decisive, drubbing."

Even with such caveats, there is ­growing agreement, among Republicans as well as Democrats, on the need to engage Hamas to achieve a sustainable peace in the Middle East – even among Obama's close advisers.

I guess as long as we don't tell Congress, this will be fine. In the meantime:

A United Nations official said Thursday that humanitarian aid to the Gaza Strip will be halted after attacks on U.N. staff and facilities by Israeli forces, who have waged a nearly two-week campaign there against Hamas militants.

U.N. spokesman Chris Gunness made the announcement shortly after the driver of a U.N. truck was killed by tank fire as he was headed to an Israeli border crossing to pick up an aid shipment.

Gunness said the U.N. delivery had been coordinated with Israel. The Israeli army has not commented.

Earlier this week, nearly 40 people were killed by Israeli mortar fire outside a U.N. school. Israel said its troops had come under fire by militants using the building for cover.

Oh, and the death toll in Gaza now tops 700. Israel reports 12 Israelis have died since Israel attacked Gaza, nine of them soldiers, none of them children.

Massacre of the Innocents, indeed. Having said all that, Wounded Bird passes on the best response. Let the people say: Amen!