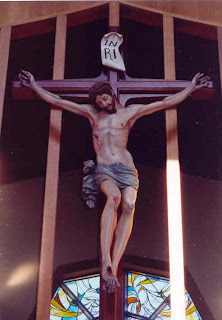 Mad Priest picked up on the cross controversy I mentioned earlier, and the comments there are so good I decided to steal some of that conversation, because I had further thoughts on the subject anyway.

St John's, Broadbridge Heath, is an "evangelical and charismatic" church (at least, the vicar, his wife and the Parish Council want it to be called that).

Which is a bit of "insider information" to keep in mind while reviewing this topic again. That leads me to KJ's comment on the ecclesiological question, i.e., what if "seekers" were put off by this sculpture:

If passers by are offended and put off by a symbol, regardless of what that symbol is, then I'm not convinced they have any real interest, or leading, at least at that time, to investigate what the church should be on about. My point above is Jesus is a bigger stumbling block than the cross as symbol. Should we jettison him?

In the early 90s at the church in Evangelical Land I attended, and at which I was in a leadership position, a new pastor came in and decided we needed to be "seeker sensitive." Buh bye, long prayers -- You'll put "seekers" to sleep. Buh bye, Advent wreath -- No one knows what "Advent" is -- You'll just confuse the pretty little heads of seekers. Wow! Those hymns are long and boring; they need to go away. We need simple music that "seekers" can understand and remember. Oh, so buh bye fabulous organ (Throne of KJ), because we don't need you in order to be able to sing ditties. And yes, buy bye cross, symbol of death. Ick! Communion seems awkward during a church service, and what a downer with that talk of blood and broken body. Let's schedule it for times when the least amount of people would be offended.

Soon it was clear we were to be about as little as possible so we would be as palatable as possible to the greatest amount of hypothetical "seekers" as possible who would, in my view, have little understanding of the faith into which they were tricked.

We're not selling soap or gym memberships, and I trust we're not relying on branded symbols to fill pews. If our focus is how to fill seats, then I hope we die as a faith. If our focus is being the body of Christ on earth, which is a great deal more about those who have no likelihood of ever taking a seat, and what is that to us, then the pews will take care of themselves.

There's also the simple fact that, while this kind of "evangelism" is appealing to churches who think growth is the reason for their existence, it's been established this kind of evangelism doesn't really "grow" anything except people who fill the pews.

Willow Creek Community Church is another "mega church that has been much studied by students of ecclesiology. G.A. Pritchard, a Ph.D. candidate sympathetic to the aims of Willow Creek's theology, studied it's "seeker services," which were designed to draw in the "unchurched" and convert them to Christians. The process was supposed to be a four-step model that drew the unchurched into a full communion among the community of believers. (An explanation of the process is available in Bill Hybel's book, Rediscovering Church.) The only problem with it was, it didn't work.*

Pritchard's study concluded that "unchurched" members of Willow Creek were certainly drawn to the "contemporary worship, which was an attractice TV variety show format, with up-tempo songs led by a "praise leader," backed by a rock band, and demanding little more than listening skills from the "congregation." The idea was this "seeker service" would be as familiar as possible (and so it was consciously modeled on a TV talk show, with the "preacher" as the "host"), and by constant exposure to a "moral" message embedded in an entertaining package, the unchurched would deepen their commitment to God by furthering their commitment to the church, and become active and engaged church members. Except few did; most, predictably, took the path of least resistance. They came for the cake and coffee, the candy, so to speak, and left. They never asked for more.

(Yes, I have no shame; I quote myself.) So if evangelism is your goal, the first question to be asked is: what's the content of your message, not: what's the success rate of your effort, as measured by filled pews.

Interestingly, the church in question is now trying to defend its position, which may well have been misrepresented by the quotes in the news articles:

Press reports have been very misleading, suggesting that we are somehow dumbing down the message of the cross and undermining the symbol of the cross in an age of political correctness. The reality is, in fact, the complete opposite. It is precisely because we believe passionately in the significance of the crucifixion of Christ that we felt led to have this particular version of the crucifix removed. What will not be clear to readers or radio listeners who have not seen the crucifix in person is the fact that the artist chose to portray Christ's facial expression as one which indicates despair and hopelessness. While this makes it an interesting piece of art, it also means that this artistic choice made by the sculptor makes this particular crucifix a misleading version of the symbol of the cross, failing to communicate the significance of the crucifixion of Christ as an event which brings eternal and undying hope to this world. Christ did not approach the crucifixion with any sense of despair or hopelessness; he did not suffer on the cross in an attitude of hopelessness; and he did not die in an attitude of hopelessness. Quite the contrary: Christ approached the cross with steadfast courage and determination; he suffered in an attitude of knowing what he was achieving through his death; and he finally faced death with certainty about the significance of his death - the steadfast hope of bringing about the redemption of humankind from the power of sin; the hope of demonstrating the full extent of God's gracious love and forgiveness; and hope that looked forward to the promise of the Resurrection on Easter morning, when the power of death, sin and evil would be broken.

In the light of this message of hopefulness, having a crucifix mounted on the outside of our church that declared a message of perpetual despair and hopelessness would not be faithful to the New Testament account of the significance of the crucifixion. As a church, we want to bring a message of hope and welcome to our local community, and not one of despair, hopelessness and rejection.

Fair enough, and not such bad reasoning, all in all. I don't think anyone put words in the Vicar's mouth; but the church is deserving of the benefit of the doubt, and another bite at the apple, having failed so badly to explain themselves the first time around. And I was going to say, on reconsideration, that this situation presents interesting challenges.

I know many of the older cathedrals in Europe include elaborate displays of Biblical narratives, including such frightful and despairing depictions as the Last Judgment. Hardly a cheering or inviting subject but, given the cultural locus of the buildings, not exactly off-putting. I don't know of any church that makes a prominent display of a crucifix, however. So there is an argument to be made that this is a rare situation, and one that doesn't necessarily underline the "message of hope" they taught me in homiletics I should always include in my sermons.

On the other hand: was this sculpture really about "despair and hopelessness?" Again, an aesthetic question. I find it moving and challenging, especially as the figure on the cross, far from looking defeated or even limp (the kind of crucifix I'm more familiar with), actually has its head upright, and seems to be looking at something on its left, and directing our attention there. So perhaps this references the conversation between Jesus and the two criminals, as recorded in Luke? Which would mean this sculpture could be an opening point for discussion, especially about what Jesus said?

One of the hardest lessons I learned in seminary, but one of the most important, was the need to include the entire Biblical story in my understanding of God, of humanity, of ecclesiology (the purpose and mission of the church). The more you pick and choose from scripture, the more you shape something that resembles you, and not God. All those prickly passages and challenging demands and downright offensive or irreconcilable bits of Scripture, from Genesis 2 through Deutero Paul and especially the Letter to the Hebrews (well, for me, anyway), have to be included in my preaching and pastoring, or it isn't God's word I proclaim, but my own.

I find it to be the only way to overcome despair and hopelessness. As Genesis (the rock group, not the book of Moses) sang it: "You've gotta get in to get out." And getting in sometimes means you've got to get in despite not being especially drawn to the place. I mean, if that criminal was going to be with Jesus in paradise that day, he wasn't going to escape the cross to do it.

Curious form of evangelism, isn't it?