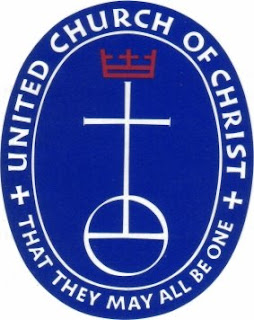 Among others who can lay some claim to Barack Obama is the United Church of Christ.

The symbol of the United Church of Christ comprises a crown, cross and orb enclosed within a double oval bearing the name of the church and the prayer of Jesus, "That they may all be one" (John 17:21).

It is based on an ancient Christian symbol called the "Cross of Victory" or the "Cross Triumphant." The crown symbolizes the sovereignty of Christ. The cross recalls the suffering of Christ—his arms outstretched on the wood of the cross—for the salvation of humanity. The orb, divided into three parts, reminds us of Jesus' command to be his "witnesses in Jerusalem and in all Judea and Samaria and to the ends of the earth" (Acts 1:8). The verse from Scripture reflects our historic commitment to the restoration of unity among the separated churches of Jesus Christ.

There is a phrase, claimed by many churches, used by the E&R church (one of the UCC's predecessors), that Obama also seems to embody:

In esssentials, unity; in non-essentials, diversity; in all things, charity.

It's fair to say he represents the best of UCC. And that he embodies what the UCC teaches and preaches.