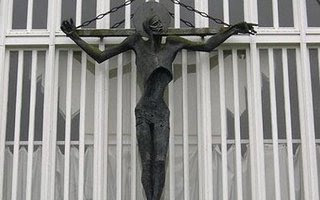 And they tried to give him wine mixed with myrrh, but he didn't take it. And they crucify him, and they divide up his garments, casting lots to see who would get what. It was 9 o'clock in the morning when they crucified him. And the inscription, which identified his crime, read, 'The King of the Judeans.' And with him they crucify two rebels, one on his right and one on his left.